Tests by Epitiro, carried out on behalf of Ofcom, have positioned O2 as the best performing carrier for mobile broadband dongles and data cards. Orange came out worst, but the operator is not happy with the methodology of the research.

Epitiro carried out its tests between September and December 2010, using a combination of static probes, drive tests and consumer reports via a speed test app. In total, 4.2 million tests were made during the report.

Overall, O2 performed the best, but there are of course geographical differences in performance. Orange came bottom of a chart of average download speeds, achieving an average of just over 1Mbps, compared to O2's measured average of 2.5Mbps. 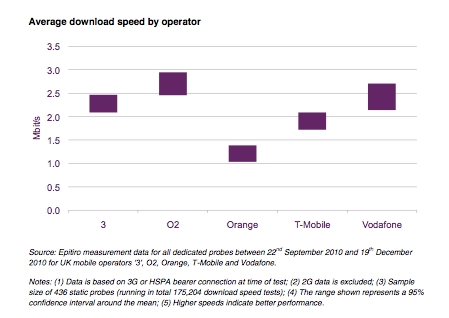 A chart showing the distribution of download speeds shows that Orange does not figure much above the 2Mbps marker, with the bulk of its performance falling in the 0.5-2Mbps range. In fact, 20% of Orange's tests showed up in the less than 0.5Mbps range, a much higher percentage than the other operators.

Orange, though, took issue with the methodology of the report. It also said it had upped its game since the research. A statement from the operator said:

"Our main concern is that Ofcom's study only focussed on dongles, which are only one part of a consumer's mobile broadband experience and excludes the millions of users that access the internet through their 3G smart phones.

It also excludes 2G data as well as Wi-Fi and we don't believe it reflects actual 3G geographic coverage or how customers actually use their mobile broadband services. We offer our customers the UK's largest mobile network and access to thousands of Wi-Fi hotspots nationwide to ensure they can get online wherever they are, and on whatever device they are using. Our customers know what works best for them and we're proud to deliver that flexibility.

Since this research was conducted 6 months ago, we've delivered significant improvements as part of ongoing investment in our network and we feel this significantly enhances our position.  This is backed up by the recent independent Mobile Broadband Genie Road Trip 2011 Awards, published in May, where we came second in the overall Dongle on the Move category and first in Road Trip's Most Stable category.

We will continue working with Ofcom to address our concerns about this report and to ensure any further iterations better reflect what really matters to consumers and the many issues which combine to make an effective mobile network."

O2, however, was more welcoming of the report's findings, seeing the report as validation of its network investments over the past two years. Derek McManus, COO for O2 said: “Our customers are seeing the benefit from the huge investment we have made in our network. We always aim to deliver the best network experience for our customers and these results are another indicator that we are doing just that.”

Iain Wood, VP of Marketing at test company Epitiro, said that all the operators had been consulted and given feedback on the test methodology before the commencement of testing. Orange had not expressed any concerns about the methodology, he said, and still has not done so directly to Epitiro.

Epitiro worked hard to find 100 stable locations where all operators had services, he said. All services were tested using the same equipment at the same location, using the same parameters he said.

Responding to Orange's point that the tests had excluded smartphones, Wood pointed out that the drive tests in dense urban environments had used smartphones. He added that he did not think that using smartphones to test performance would have made much difference to the results between operators - although different smartphones can of course affect performance.

"We did this as a test using dongles because Ofcom wanted to make a direct comparison between fixed and mobile broadband for consumers who are making an either/or decision in terms of their main broadband connection," Wood said.