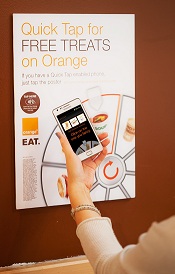 Not that there’s anything wrong with a dumb pipe…

Mobile operators can use near field communications (NFC) as a strategy to avoid being labelled a ‘dumb pipe’, according to Daniel Gurrola, vice president of strategy and business development , mobile consumer, at Orange.

A solid NFC strategy is steering Orange away from being seen by consumers as a utility, Gurrola said.

“This is about Orange working to be relevant in people’s lives. NFC plays right into our vision, which has two angles: becoming our customers’ ‘digital coach’; and enriching their communications needs, wherever, however, easily and securely. When it comes down to it, we want to continue to be seen as relevant, and saying we want to be seen as relevant in people’s lives is the opposite of saying we want to be a dumb pipe.

“We mustn’t demonise the dumb pipe though,” he added. “You can make very healthy returns being a dumb pipe. The point is, Orange has decided we don’t want to be a dumb pipe.”

Orange sees NFC as the direction communications is evolving towards, Gurrola continued. “It’s a really exciting area. We see NFC as the third revolution; the first was SMS, the second was mobile broadband, and the third is NFC.”

Gurrola likened the evolution of NFC to that of apps: “Today you can see how apps have changed your life, but three years ago I was debating with people as to how significant apps were really going to be. We are at the same point with NFC now; will it really change people’s lives? We believe it will. We want to be active in shaping this area, taking a leading role with standards, deployments, investments, and working with OEMs.”

Orange is continuing to push NFC in France, with commercial roll outs of the technology in Nice and now Strasbourg. A further nine cities are to follow soon.
Orange is also trialling NFC in Spain and Poland, and expects deployments this year in Spain, where it is working with bank Santander, incorporating a mobile wallet featuring for the first time both Visa and Mastercard.

Gurrola stated that Orange is currently in discussions with local operators in both countries, not to coordinate launches, but to agree the NFC standards to be used and also to define interoperable business processes.

“What we want is a way for customers to access services that will be distinct between service providers, but that those services are easy to use, so the customer gets the same experience operator to operator. In order for NFC to have an impact, it has to involve local operators; you need interoperability,” he said. “NFC is a hard thing to do.”