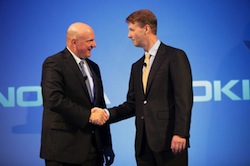 With Nokia selling its mobile phone business to Microsoft for €5.4 billion, including a 10-year patent licensing agreement, the Finland-based vendor will now focus on three core technology areas.

NSN chief executive Rajeev Suri, fresh from overseeing Nokia’s €1.7 billion buy out of former joint venture partner Siemens, confirmed that nothing will change on the networks side as a result of the Microsoft deal.

“Today marks an important step for our parent company Nokia, and they have our full support. For NSN, it is business as usual. We remain focused on executing our strategy, completing our restructuring and delivering industry-leading innovation to our customers every day,” he commented.

“With Nokia’s renewed financial strength, NSN is well positioned to continue to execute its strategy and deliver industry-leading innovation to customers.”

Informa principal analyst Dimitris Mavrakis concurs. “If you take into account the fact that the new Nokia is a much smaller company where NSN is a much bigger business unit, as the crown jewel definitely they can lift the whole company,” he told Mobile Europe.

“It was clear that the whole smartphone business was going to struggle. For Nokia it makes [the business] more agile with much less risk.”

But the new Nokia will be more than just a pure network vendor based around NSN.

Nokia’s HERE mapping software business has also been making a name for itself in the geolocation market, signing big contracts with Toyota and Qualcomm in the past six months alone.

Last week, HERE announced the Connected Driving suite, the only end-to-end driving solution on the market, which helps car markers and in-vehicle technology suppliers more easily connect the car to the cloud.

There is also HERE Auto Cloud, which provides drivers with real-time traffic updates and recommendations on parking and fuel prices; HERE Auto Companion, which synchronises a driver’s favourite routes across their devices into the car using an app; and HERE Traffic, which collects and analyses data about traffic congestion, weather conditions and road construction to improve traffic route advice.

According to Mavrakis, there is potential for HERE to improve Nokia’s fortunes.

“Now that Nokia is free from Microsoft and is a completely independent company, they can license their mapping software to whoever they want like Apple or Google. Their business is successful but currently a small part of the business,” he said.

According to Juniper Research, Nokia is expected to focus on mapping and geo-spatial services as an “an effective alternative to Google”.

Much less is known about the third advanced technologies business area that Nokia is focusing on.

In a statement, it said it would explore new products through advanced R&D into connectivity, sensing and material technologies, as well as web and cloud technologies.

This will be driven by Nokia’s Chief Technology Office organization and patent portfolio, which the company has retained ownership of following the Microsoft deal.