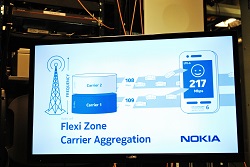 Nokia Networks have delivered peak data rates of more than 200MBps, in the vendor’s first example of carrier aggregation through small cells.

The trial was conducted at the vendor’s lab in Illinois, United States, using its Flexi Zone small cell product and a Category 6 device.

The products support up to 600 active users per cell, which Nokia Networks said can help operators meet growth in demand, particularly in dense urban areas. The vendor said it has signed 10 new small cell deals during the past six weeks, including contracts with Zain KSA and Vodafone Group.

Marc Rouanne, Executive Vice-President, Mobile Broadband, Nokia Networks, said: “The market success reflects the ongoing development of our Flexi Zone small cells solution. When we first announced Flexi Zone micro and pico base stations, we did what many pundits thought was impossible by packing a macro sector’s worth of capacity into the industry’s smallest outdoor small cell and bringing full macro software parity.

“We also promised to show that it would be possible to software upgrade a small cell to LTE-A. Now we’ve done that too.”

The demonstration follows that of rival Ericsson, who launched a tablet-sized indoor picocell offering carrier aggregation last month. The product has been designed for use in smaller sites.

According to a recent report from ABI Research, 4G small cells will be the fastest growing category during the next 12 months, as operators look to the products to deal with capacity issues in dense urban areas.

Elsewhere, the report said the sector has been kickstarted by the introduction of small cells as a service. It predicted the market will experience a CAGR of 48 percent between this year and 2019.