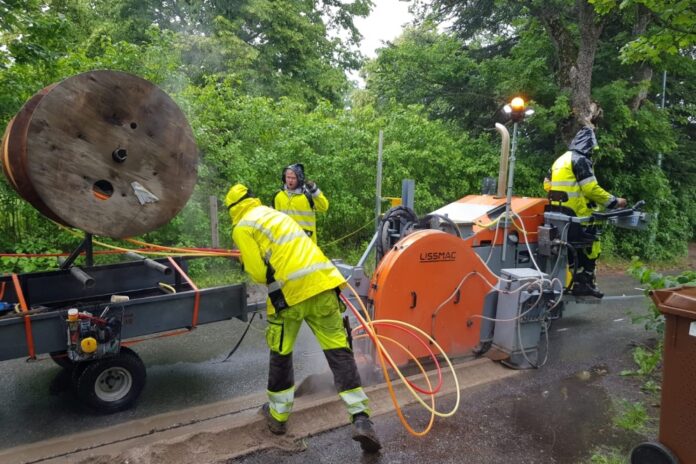 BT-owned Openreach has outlined plans to make full-fibre broadband available in 227 market towns and villages in the UK, with building to start in the next 14 months.

Over 250,000 homes and businesses are set to benefit. New locations include Aberdare, South Wales and Saxmundham, Suffolk.
The plans follow trials carried out by Openreach to reduce the cost of installing fibre to make it viable in areas previously considered too complex or expensive to upgrade.

New tools and techniques include:

•    Diamond cutter (pictured): A giant rotating circular blade with diamonds embedded in the metal coating on its edge, enabling it to slice through roads/pavement while simultaneously feeding in tubing for fibre-optic cables as it moves along the ground, slashing the time taken to deploy fibre by months, according to Openreach.

•    Ditch Witch or GeoRipper: A blade carves a narrow trench into soft ground – allowing engineers to lay small fibre cables of up to 150 metres. Openreach says it is ten times faster than digging these manually.

•    Ground Penetrating Radar (GPR): The kit uses a transmitter to send pulses of high-frequency radio waves through the ground which bounce back off objects hidden underground to a receiving antenna. This creates a digital ‘picture’ or cross-section of what lies underneath from the signal variations, allowing engineers to map out a clear route for new cables without any drilling or digging, avoiding the need for road closures.

Clive Selley, CEO, Openreach, said, “Our full-fibre build programme is going great guns –  having passed over 2 million premises already on the way to our 4 million target by March 2021.

He added, “Our ambition is to reach 15 million premises by mid-2020s if right investment conditions are in place. Currently, the biggest missing piece of this puzzle is getting an exemption from business rates on building fibre cables which is critical for any fibre builder’s long-term investment case.”

In September, Ofcom said that just 8% of all premises in the UK had full-fibre broadband, lagging behind many countries in Europe.

Boost to the economy?

A report by the Centre for Economics & Business Research (Cebr), commissioned by Openreach, found that fibre connectivity for every property by 2025 – an ambition harboured by the UK Prime Minister, Boris Johnson – could bring half a million people back into the workforce.

It says fibre would allow 400,000 to work from home and enable 270,000 people to move out of cities into rural areas, helping stimulate regional and rural economic growth. Further, it suggested that 300 million commuting trips could be saved each year, with three billion fewer kilometres travelled by car.