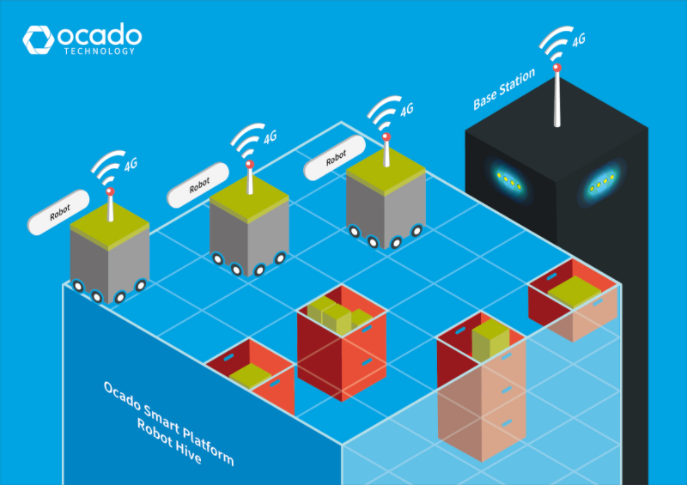 British online grocery retailer Ocado is using unlicensed LTE to control the robots in its warehouse, the company has revealed.

It has developed its own Smart Platform that provides improved connectivity to more than 1,000 robots working across a 150 metre radius in a warehouse.

Ocado has set up the connected warehouse in Andover, England and claimed it is the first of its kind to use unlicensed LTE for connectivity.

Further, it is offering Smart Platform to other online retail companies as a managed service.

Adam Green, wireless team leader at Ocado, said: "While building a robot can be a relatively straightforward task, creating a swarm of thousands of robots and making sure you can communicate with every single in a tenth of a second is a whole different ball game.

"We have worked closely with Cambridge Consultants to develop an innovative system that takes advantage of modern wireless communications principles but has secret ingredients that tailor it to our specific environment. Since the protocol works in the license-free spectrum, we can also deploy it at a moment's notice in any location around the world."

The project originated with Ocado trying to make up for the shortcomings in Wi-Fi. Green said that technology did not offer sufficient guarantees on latency, especially given the amount of robots it wanted to connect.

He said: "There is also the issue of scale, as most Wi-Fi access points (APs) can support a maximum of somewhere between 64 and 256 concurrent clients. Consider that we need to communicate with swarms of thousands of robots, talking to each ten times a second and with guaranteed latency. We needed to understand what this meant for the network design as well as how to accommodate it in an already busy spectrum plan."

Another issue was the lack of predictability with roaming within a Wi-Fi network, given the number of access points required for Ocado's network.

Green said the retailer and technology company solved this by building the private LTE network, which he said eliminated roaming problems.

He added: "Like all extremely low-latency, real-time systems, we also needed to include features to provide redundancy. The devices have physical attributes such as dual network and power links and also logical tools to enable failover to hot standby units; this has enabled us to upgrade the base station firmware without impacting its operation. These tools also enable us to automatically recover from network and power outages, which has been invaluable during site commissioning tests."