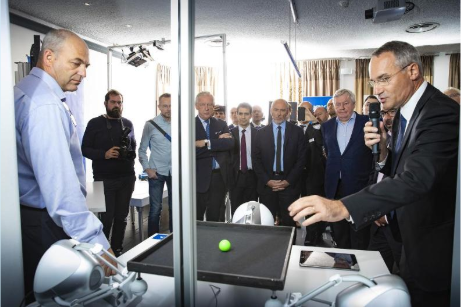 Orange Belgium made robots balance a ball, streamed holographic concerts in virtual reality, and connected gamers across a range of 5G trials held with Nokia.

The Colonster Castle in Liège was the venue for five demonstrations of 5G's potential. The telcos also hit speeds of 6GBps on the 3.5GHz band, which they claimed was the fastest ever speeds hit in a Belgian live trial.

The quirkiest demonstration was three constantly moving robots which had to balance a ball held between them on a plate. Orange said it showed 5G's potential to be central to factories of the future, when it could be used to enable real-time communication between machines.

Virtual reality was used in two demonstrations, with the first reconstructing a live concert in 3D for viewing through a headset. VR users were also able to watch video of the surroundings of Colonster Castle via an 8K video filmed through eight sensors and transferred over 5G.

The telcos also showcased how important the low latencies of 5G would be to connected vehicles, with players invited to drive toy cars along a track connected to either a 3G, LTE or 5G network, with varying results.

Finally, Sector One, the Orange Belgium-sponsored eSports team, played League of Legends, Hearthstone and FIFA 18 through three computers connected to a 5G network.

Orange Belgium is expected to launch 5G from 2020. It said the technology would benefit both personal and enterprise customers through new use cases and services.

CEO Michaël Trabbia said: “We are very proud to demonstrate real 5G use cases that go beyond a simple speed test and to stage as a ‘première’ in Liège the benefits of a high capacity, high reliability and low latency connectivity for the customers.

"For residential consumers 5G will allow an increasing use of very high-definition videos and real time immersive augmented/virtual reality experiences.

"In the professional sphere, 5G will allow us to offer dedicated and tailor made connectivity adapted to specific requirements of new innovative applications such as wireless manufacturing, real-time automation, smart cities, Internet of Things, autonomous vehicles, remote medical assistance, etc.”

Orange Group CEO Stéphane Richard, who attended the event, added: “I am very pleased to be part of this milestone of Orange Belgium in Liège.

"We already demonstrated the advantages of 5G in Barcelona during Mobile World Congress earlier this year and we are working closely within the standardisation bodies to develop the 5G technology.

"We are committed to deploying the 5G networks with standardised, interoperable and enriched equipment and functions all across Europe.”