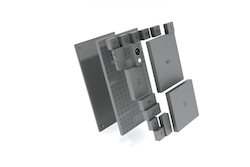 Google will update plans for the forthcoming Project Ara modular smartphone, after it announced its second module developers conference.

DevCon2 will showcase the latest Module Developers Kit, version 0.20, outline Google’s plans for selling the products and explain how developers can build and test modules.

Events will be held in January for developers in the Americas and Europe, with a separate event held for Asian developers.

In a blog post, Paul Eremenko, Head of Project Ara, said: “We have been hard at work maturing and improving the Ara platform, and we will highlight the major changes and advances in the MDK. We will also demo the latest Ara prototype and developer hardware. We will highlight some ongoing module development efforts from select developers. And we will share early plans for a market pilot in 2015.”

Google held its first developer event for Project Ara earlier this year. It showed off three devices – a phablet, conventional smartphone and nano device. Consumers will be able to slot camera, processor and screens into place, which will connect via magnets.

The project had been part of Motorola’s business but fell under Google’s remit after it sold the handset arm to Lenovo earlier this year. The €2.1 billion deal was formally completed this morning, according to a Motorola spokesperson.

Phonebloks, which is working with Google on the project, filmed a video update about the smartphones, which can be viewed below.