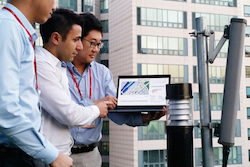 SK Telecom and Ericsson have co-developed a new smart cell technology to improve the energy efficiency of base stations by dynamically controlling when they are activated.

Smart-Wake up controls idle base stations during late night and early morning so that they only become operational when traffic enters the cell. In doing so, interference between base stations can be decreased, improving data transmission speeds.

When no mobile phone is detected within the cell’s proximity, the base station will remain idle. Conversely, the cell will reactivate once a mobile device enters the vicinity. This “intelligent” operation means energy waste is be reduced, SK Telecom said.

According to SK Telecom, the technology increased data throughput by 18 percent and reduced power consumption by just over a fifth in recent trials.

It added that energy efficiency was one of the “major agenda items” surrounding discussions on the future of 5G networks, as well as being a key topic for global consortiums Green Touch and 3GPP.

The operator recently announced a partnership with Samsung to conduct research into 5G technologies, including small cells.

The companies said they hoped to work together with global standardisation groups to make the shift to 5G easier.