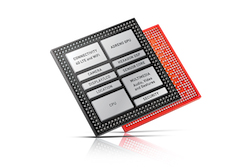 Qualcomm has introduced four new CPUs to its mid-tier 600 and 400 series that support high-end features, including LTE-Advanced and 4K video capture.

The chipmaker, whose top-end Snapdragon 810 has reportedly been snubbed by device maker Samsung, said its new Snapdragon 620, 618, 425 and 415 chips would provide “cost-conscious” users with a high-performance mobile experience.

Qualcomm said the 425 also supported all major network modes and frequency bands alongside dual SIM, LTE broadcast and VolTE support, making it a potential “leader in the high-volume segment.”

Alex Katouzian, SVP of Product Management at Qualcomm, said: “It has always been Qualcomm Technologies’ strategy to introduce industry-leading features first at the premium Snapdragon 800 tier design point, and then scale these features into our Snapdragon 600, 400 and 200 products, so that we can help our customers deliver great user experiences to cost-conscious consumers.

“We are excited to announce the Snapdragon 620 and 618 processors with next-generation graphics, camera, 4K video capture and connectivity, all premium tier features previously only found in our Snapdragon 800 class products.

A report from Strategy Analytics in January revealed that Qualcomm is currently pulling in more than half of all revenue from LTE baseband and smartphone SoC markets, holding a 64 percent share.