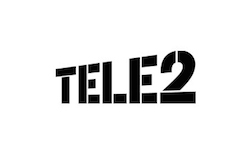 Tele2 has brought LTE connectivity to the Internet of Things, with the operator claiming it will benefit the security, connected car and advertising sectors.

The Swedish operator said it wanted to bring faster speeds of up to 50MB per second, more stable connections and shorter response times. IoT player Jasper is managing the operator’s M2M control centre.

Rami Avidan, Commercial Director at Tele2 M2M Global Solutions, said: “This is further proof of Tele2 challenging and pushing the M2M/IoT game to new levels. As far as I know, Tele2 is the second operator in the world to publicly announce 4G/LTE for M2M/IoT services. We will now be able to utilise that technology for new exciting types of implementations, in the Tele2 footprint as well as together with applicable roaming partners.”

Meanwhile, Beecham Research has become the latest to add its voice to the debate around what will constitute a realistic target for the IoT.

It said a target of one billion connections by 2020 was a “realistic” target but cautioned against outlandish claims about the potential of the sector. Last week, the chairman of the International M2M Council warned that excessive hype could damage the sector, with some companies making “cartoonish” claims. Both Ericsson and Telenor have claimed the market will see 50 billion connections by 2020, while Huawei has claimed 100 billion.

Saverio Romeo, Principal Analyst at Beecham Research, said: “While the M2M market is growing strongly, we have seen some excessive predictions that simply create unrealistic expectations.”

Robin Duke-Woolley, Founder and CEO of Beecham Research, added: “An average growth rate of nearly 30 percent per annum over the next few years represents both a very strong and exciting opportunity in a services market that is substantially business-to-business. Unfortunately there are some ludicrous, multi-billion connected device forecasts around at present for M2M and IoT that betray a complete lack of understanding about how the market really works. Much faster growth rates are just not realistic in this market because enterprises do not assimilate new technologies into their business processes that quickly.”