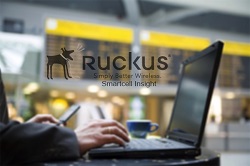 Ruckus Wireless has launched what it claims are the industry’s lightest and smallest 802.11ac access points, designed for high density venues like railway stations and stadiums and outdoor venues like business parks and town squares.
There are currently two models in the ZoneFlex T300 series, one omnidirectional and one narrow band, and they carry Ruckus’ patented BeamFlex technology for interference mitigation and its ChannelFly technology for predictive channel selection.
They are significantly lighter than other outdoor 802.11ac APs, the vendor said, weighing only around a kilo, and they are small in size minimize visual impact.
Greg Beach, VP of Product Management at Ruckus Wireless commented: “Both are easy to install, and are ideal for service providers and venue owners looking to quickly deploy reliable outdoor Wi-Fi networks in environments such as stadiums, train stations, and parks. They’re 50 percent lighter, significantly smaller in overall size, and offer a much lower total cost of ownership, compared with other products on the market that aren’t nearly as feature-rich.”
Both models also support up to 500 concurrent users per AP and are easy to install using standard 802.3af PoE switches or PoE injectors.
They also support co-location operation with distributed antenna systems (DAS) and small cell radios. Pricing has been set and the products start shipping within a couple of months.
Ruckus recently received a boost when it was reported by GigaOm and others that it would be working with Google to build a large-scale Wi-Fi network in the cloud that any business will be able to hang its wireless routers off.
It’s thought that the network will become a key component in any Google plan to offer an alternative wireless network that circumvents the traditional mobile carrier industry.
Share
Facebook
Twitter
Linkedin
Pinterest
WhatsApp
Previous articleBouygues Telecom launches LTE-A across France
Next articleAmazon opens new Fire smartphone to developers