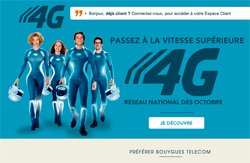 Bouygues Telecom has become the latest operator in Europe to deploy LTE-Advanced.

France’s third largest operator is aggregating frequency bands to launch LTE-A in a tranche of cities across France, and promised to make it available at no extra cost to its customers.

LTE-A is now available in Lyon, Grenoble, Vanves, Issy-les-Moulineaux and Rosny-sous-Bois, and will be available in another 16 cities from September.

LTE-A compatible smartphones will be available the same month.

Bouygues became the first French operator to obtain a speed of 182Mbps in October 2013, but said LTE-A would offer speeds of up to 220 Mbps.

Swisscom revealed earlier this week that it has rolled out an LTE-A network in two Swiss cities.

Bouygues also announced it is improving its 4G network by widening the frequency band used at its 1800MHz sites from 10MHz to 15MHz.

According to a report from the Global mobile Suppliers Association last week, at least a fifth of the 300 plus operators deploying LTE networks around the world are also investing in LTE-A.