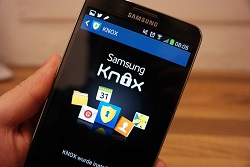 Samsung has brought iOS support to its Knox security solution, as it unveiled a  beefed up version of the product at Mobile World Congress (MWC) in Barcelona.

Knox 2.0 will allow corporate software developers to implement security policies into their software, which would ensure that only the authorised person would gain access to the system.

It also brings two-factor biometric authentication, which requires both password and fingerprint verification to unlock and a Knox Key Store for generating and managing encryption keys inside the TrustZone protected environment.

Samsung Knox 2.0 will also utilise the fingerprint sensor of the Galaxy S5, which was unveiled at MWC on Monday (24 February).

Samsung will also be setting up a Knox marketplace, where IT staff can set up deploy applications across all users phones.

The Korean manufacturer said that it registers 210,000 Knox-enabled devices each month, translating to an average of approximately 7,000 devices each day.

“Thanks to the rapid adoption of KNOX over the past 5 months since its first commercial availability, we needed to evolve the Samsung KNOX platform to meet the changing needs of our customers and the enterprise as a whole,” said JK Shin, President and CEO, Head of IT & Mobile Communications Division at Samsung Electronics.

Knox 2.0, which requires Android 4.4 Kitkat, will be pre-installed on the Galaxy S5, and will begin rolling out to other Galaxy devices in the second quarter of this year. Samsung first launched Knox at last year’s Mobile World Congress