Samsung leaps ahead of Apple, Google in IoT race with SmartThings buy 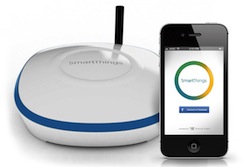 The company offers smart home kits to customers including a hub unit and various sensors for movement and temperature, which can be placed around the home. After connecting the kit, users can monitor and control connected devices using a smartphone app.

The purchase enables Samsung to close the loop between its consumer electronics and domestic appliances businesses and puts it in a strong stance in the smart home market.

Both Apple and Google, which have made smart home announcements this year, lack the range of home appliances that Samsung boasts, while companies such as LG do not enjoy the same presence in the mobile landscape.

Due to Samsung’s prevalence in the market, the Korean company could quickly capitalise on its large installed base and drive the take-up of its connected domestic appliances, the analyst said.

Despite concern from members of the SmartThings community that Samsung would eventually make the platform exclusive to Samsung products, CEO Alex Hawkinson stressed that the company was “100 percent committed” to its original vision, and stated “SmartThings will remain SmartThings”.

He added: “While we will remain operationally independent, joining forces with Samsung will enable us to support all of the leading smartphone vendors, devices, and applications; expand our base of developers and enhance the tools and programs that they rely on; and help many more people around the world easily control and monitor their homes using SmartThings.

He also said Samsung’s acquisition of SmartThings presented “an enormous opportunity” for the company to realise its long-term ambitions.

Meanwhile, Samsung continues to work with Google’s Nest Labs and ARM as Thread Group, an initiative that hopes to improve interoperability between devices in the connected home.