Mobile operators are leaving revenue on the table by bumping customers too quickly to 2G networks as a result of running poorly optimised 3G networks, according to Magnus Ewerbring, Head of Mobile Broadband at Ericsson.

Ewerbring said that a high number of users are receiving 2G coverage where 3G might be available — as a result of operators being too quick to “dump” users onto 2G networks where 3G networks appear to be congested. The poor user experience is a result of “poor network tuning,” he said. “Smartphones are about snappiness of service. With this quality of service, the risk is that people can churn.”

The important knock-on effect of this is that, in Ericsson’s view, there is a risk operators will move to deploy dense, capacity-focussed solutions before they have “fixed” the macro layer. “We like small cells, but first things first. There’s no sense in in looking for capacity benefits if you have not done the macro layer.

In many operator deployments poor quality of service is in many cases about backhaul and a lot about dimensioning. You need to carefully plan the network in its entirety to make sure there are no bottlenecks.”

This top down, “small cells come last” approach, is illustrated most graphically in Tokyo, where Ericsson supports Softbank’s network. In one central area, around Shinjuku station — through which pass 3.5million passengers a day — a single square kilometre is served by 16 “macro”, rooftop base stations. These are maxed out at six sectors per BTS, with four carriers at 2100MHz and two at 1500MHz.  The next layer of coverage is provided by in-building DAS. 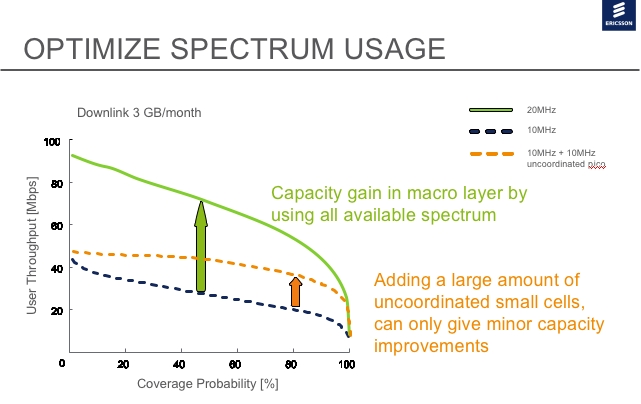 Ewerbring said that although what he jokingly termed “the goons of the small cells” would say “spray this area with small cells”, that approach could lead to a degradation of performance as these cells are not co-ordinated with the macro layer.

“You have to split the spectrum so the small cells operate on a unique layer, or they will degrade performance. If you set aside dedicated spectrum that will remove capacity from the macro layer.”

To expand, Ewerbring is talking about deploying (or more accurately, not deploying) metro femtocells that operate in dedicated spectrum. He prefers an approach that slots picocells into the macrocells for specific use cases.

“Yes we need to add more solutions, and there is a need to go to smaller cells, but ones that are well integrated into the rest of the network. Our recipe for that is to come out with smaller such units with less power. But don’t cream the area with zillions of small cells. Use a limited number of small cells where you have a coverage whitespot, or capacity hotspot, and make sure they are integrated with the macro network.”