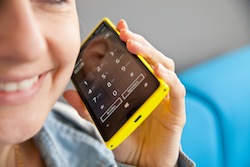 The idea is that operators would use the vendor’s platform and leverage its network, which currently offers IP voice interconnections – 26 of which are HD-ready – to 210 mobile operators.

“We will leverage our community of IP-connected MNOs to quickly enable HD voice calls between the widest possible range of destinations, maximising the benefits of premium call quality for our partners and their end users.”

Based on the ITU standard known as “Wideband audio” first coined in 1987, the first HD voice service for mobile phones was launched by FT- Orange in Moldova in 2009.

In March this year, Telenor launched HD voice services on its 3G network, with plans to add HD voice to its 2G network later this year, and an eventual aim to be able to support HD voice call handover between 2G to 3G networks.

The same month, OTT communications app Viber announced that it had updated its app for Windows Phone 8 in order to offer free calls with HD sound, designed to be routed over VoLTE.

However, given only the most recent of smartphones support HD voice, there is a lot more interest in the potential for Voice-over-LTE (VoLTE) services to work on new 4G LTE deployments.

Mindful of the fact that LTE is key on operators’ minds, during Mobile World Congress at the end of February, Ericsson and China Mobile demonstrated the first dual-mode HD voice call over LTE between TD-LTE and LTE, using Ericsson’s converged LTE TDD/FDD network infrastructure, which is based on the 3GPP standard.