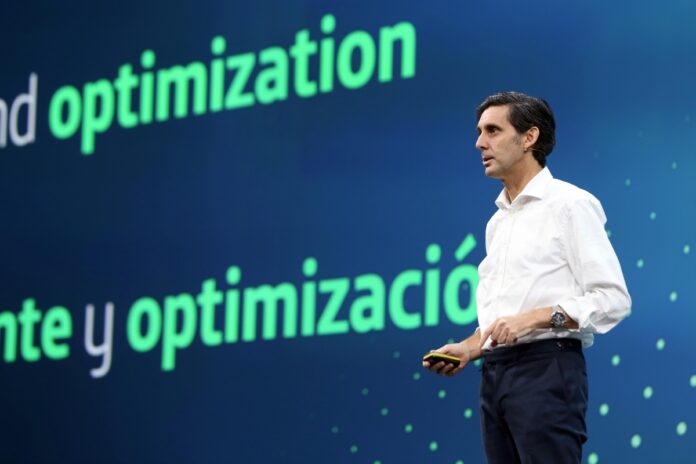 José María Álvarez-Pallete asks them to guarantee competition on equal terms at the FT-ETNO Summit in London via video.

José María Álvarez-Pallete said, “Be brave – allow us all to compete with the same rules. It is a question of values ​​and rights in the digital world”.

As he noted, “It is ironic that the year in which it has become more apparent than ever that connectivity plays an essential role in the new economy, telecommunications revenues continue to fall and their value is at its lowest point”.

European telecommunications is one of the most heavily regulated sectors in the world.

Whereas a roughly equivalent population to Europe in the US has three main mobile operators, most of Europe’s countries, no matter how small have four, and the European Commission has generally been against consolidation fearing it will put prices up and give consumers less choice. The same is true on the fixed front.

Álvarez-Pallete called for “deregulation of the telecommunications market” that “stops depleting the resources of the sector. Do not focus on maximising revenue from 5G auctions because the money spent on spectrum will not be invested in the networks.”  Álvarez-Pallete said, “Europe no longer has much room to react. Be brave, let us compete by the same rules.”

He said deregulation of the telco sector should be “the next challenge” for authorities, said Álvarez-Pallete, who welcomed “with approval” the Commission’s initiative to regulate the guardians of the digital world. “That is the right way.”  But we must move towards “ending the expropriation of new generation networks by imposing third party access with regulated prices. These networks have been built in a competitive environment and sometimes with co-investment”.

He asked authorities, “Do not focus on maximizing revenues from 5G auctions…or on keeping the telecommunications sector deflationary, because the money spent on spectrum will not be invested in the networks. We need new competition rules that allow the creation of strong operators and healthy markets in Europe. This is critical ”.

Álvarez-Pallete concluded his speech at the forum by appealing to the values ​​and fundamentals that have always characterised Europe and that we must take advantage of to build “a new, more resistant and better Europe that speaks with one voice”.

The head of Telefónica said the pandemic has put us “a time machine that has accelerated all digital processes by five years”, and shown that “when the physical world closes, the digital world remains open”.

He noted teleworking, electronic commerce, health, entertainment, online education or artificial intelligence have made it possible for life to continue and have also helped prevent new outbreaks.

The Commissioner for the Interior of the European Commission, Thierry Breton, also spoke.