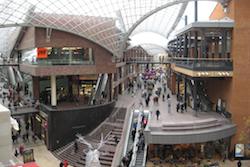 Retailers may be inadequately prepared for the rapidly-growing m-commerce industry after new findings found that less than three percent believe their businesses is sufficiently mobile-ready.

It further predicts that the influence of mobile technologies on spending will increase from £18.4 billion (€25.5 billion) currently to £112 billion (€155 billion) over the same period. As a result, 42 percent of retail sales will involve a mobile device “in some way or another” by the middle of the next decade, making mobile the fastest-growing retail segment as a result.

Nevertheless, 70 percent of the 221 UK retailers quizzed by Barclays revealed that they did not currently offer a mobile website or app to customers due to concerns that such investments added substantial costs to online business.

Additionally, the survey found that only 14 percent of retailers provide free in-store Wi-Fi and only seven percent plan to invest in it in future. This is despite 57 percent of the 1,500 consumers surveyed saying stores should do so.

The findings appear to be at odds with the fact that retailers are increasingly targeting customers with initiatives such as augmented reality and location-based in-store marketing.

Richard Lowe, Managing Director and Head of Retail & Wholesale at Barclays, said: “With almost three quarters of consumers using their mobile devices whilst out and about, ignoring this trend would be a missed opportunity.

“Ultimately, the easiest way to drive sales is to make the shopping process as simple as possible, and retailers must cater for the mobile consumer in order to remain relevant; engaging with them through a platform that they have become increasingly reliant on.”