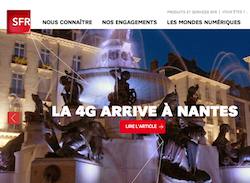 SFR, the French telecoms arm of Vivendi, announced today that it has completed the first testing of LTE-Advanced, at Efixo, its R & D labs in France in Marseille.

LTE-Advanced will enable operators to provide higher speeds to those already available in 4G LTE networks, through the aggregation of the 800 MHz and 2600 MHz radio frequency bands.

“With increased capacity and increased rates, LTE-Advanced will facilitate the spread of 4G for the greatest number,” said a spokesperson for SFR.

According to a picture released of the experiment, SFR was able to achieve 174 Mbps download speeds during the tests.

The first compatible device will be available in the market in the second half of 2014 and will be offered to individuals and businesses.

The technology is being currently tested by a number of operators around the world.

Turkish operator Turkcell has also claimed to have successfully tested LTE-A in the same month. The operator said that it had achieved mobile internet speeds of around 900 Mbps during a test in Istanbul.

SFR’s main competitors are Orange and Bouygues Telecom. Both telcos have 4G LTE services up and running now.