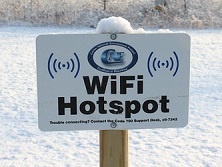 The number of Wi-Fi hotspots is set to more than double by 2018, with Europe currently accounting for less than one in 10 deployments.

Asia-Pacific is the largest region for Wi-Fi deployments, accounting for 68.6 percent of the market at the end of last year. This was followed by Latin America (12.3 percent), Europe (nine percent), North America (8.7 percent) and Middle East and Africa (1.4 percent).

Marina Lu, Research Analyst at ABI Research, said: “Mobile data growth has boosted the build-out of Wi-Fi hotspots, as it is expected that the global mobile data traffic will grow to 190,000 petabytes in 2018, from 23,000 petabytes in 2013. Wi-Fi helps to offload 3G/4G mobile Internet users to Wi-Fi networks, which is a more cost-effective method for both mobile carriers and mobile users.”

China has the largest deployment of Wi-Fi hotspots, while Brazilian operator Oi has built half a million hotspots ahead of next month’s World Cup.

In addition, the report found that fixed line companies are increasingly moving into the space.

The researchers also found an influx of activity from third parties, such as FON, which had given access to more than 12 million hotspots globally by the end of last year. The company did so by a combination of installing its own Wi-Fi hotspots and securing retail access to those of operator partners.