More
HomeNewsWi-Fi gets on the buses in London
News

Wi-Fi gets on the buses in London 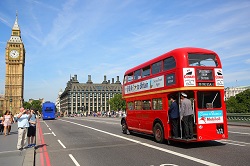 Wi-Fi vendor Bluepod Media has set up trial Wi-Fi networks on two London buses, with the city’s transport operator hoping to roll it out across the entire fleet.

The networks have been deployed on one bus on the RV1 route, which runs between Covent Garden and Tower Hill, and the route 12 bus, which operates between Dulwich and Oxford Circus.

Transport for London (TfL) said it hopes to get sponsorship for the in-bus Wi-Fi service, which fund a roll out across the city’s bus services. Around 7,500 buses transport more than six million people each day across the UK’s capital.

Virgin Media Business launched a Wi-Fi network in London’s Underground in June 2012, which now covers 144 stations across the city. The vendor has wholesale deals in place with EE, O2, Vodafone and Three for their customers to use the service for free.

Simon Reed, TfL’s Head of Technical Services Group, said: “London buses have always led the way with new technology on its network, benefiting the millions of passengers who make the most of the extensive network every day.

“Innovation is a key theme of the Year of the Bus and we have worked with our suppliers to find new and innovative ways to further improve the experience of our passengers. These trials will establish whether this technology provides genuine benefits to people on the move.”

He said he wants to bring planning applications for infrastructure under the Mayor’s remit so they could make a ruling “as a last resort” about a contentious proposal. Johnson added that he wanted to “potentially” make London the world’s first 5G capital by 2020.