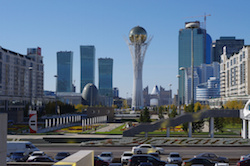 A new 5G research and development centre has been opened in Kazakhstan, focussing on multiple-in, multiple-out (MIMO) technology.

Research at the centre, in Nazarbayev University, will concentrate on developing new technologies for optimising 5G speeds and performance.

Signalling specialist Nutaq Innovation will provide the MIMO tech. It said its Titan MIMO system can support up to 1000 transceivers and enables real-time massive MIMO implementation, while also being able to measure channel conditions.

According to Nutaq, while massive MIMO technology has been extensively researched, it has yet to be “fine-tuned or tested in real-world conditions.”

Both CMRI and The Hong Kong University of Science and Technology (HKUST) are involved in the new centre, which will be headed by CMRI Research Director Professor Corbett Rowell.

Rowell commented: “5G is not a straightforward evolution from 4G and requires a complete rethink of current practices. Although the industry has been talking about 5G for a while, current research is a couple of years away from completion.

“The 5G Development Centre will speed up the process and provide a central focus for 5G research in Asia.”

In November last year, China Mobile carried out a field test of “pre-5G” massive MIMO technology with ZTE, which it claimed accelerated data throughputs between four and six times.