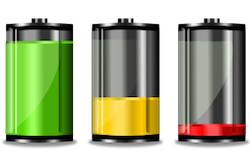 Smartphone batteries are unlikely to see any significant improvement in the near future despite new technologies presenting a major opportunity for manufacturers, a new report has claimed.

Deloitte’s 2015 Technology, Media & Telecommunications Predictions said that while the rewards for inventors of new and more efficient battery designs were “enormous”, the difficulty in identifying new chemistries and the testing period required to approve them meant that a “breakthrough” battery technology is unlikely before the end of the decade.

Further, new battery types could not simply be “dropped” into existing device form-factors, meaning new charging technologies or design considerations may be required.

Current lithium ion (Li-ion) technology – which is used in modern smartphones and tablets – will “improve only modestly” during 2015, with most seeing just a five percent greater unit charge, the report found.

However, the professional services firm said that battery life will improve this year thanks to improvements in other device components, such as more efficient processors and software.

Deloitte predicted that the average battery life of smartphones shipped in 2015 could be increased by up to 25 percent.

Smartphone vendors should look to new processor designs, higher battery capacities and fast-charging capabilities to help get the most from existing technology, the company advised.