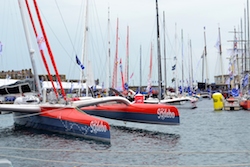 The event, which finishes on the island of Guadeloupe, will use a private 4G network to handle geolocation of all of the security operations and the exchange of video between them. The vendor said the emergency services will have full access to the video and relevant apps in order to anticipate any potential problems during the event.

Captain Henri de Foucauld, Head of the Information and Communication Systems Office of the Navy’s General Staff, said: “In order to meet the Navy’s needs, particularly in the area of maritime protection and safety, the Navy is constantly studying the opportunities offered by new developments in information and communication technology. This is why the Navy became involved in this promising experiment, since 4G-LTE coverage partly covers coastal operations.”

It is the second time this year a vendor has used a sailing event to demonstrate its technology.

LTE Broadcast tech gains traction with operators around the world