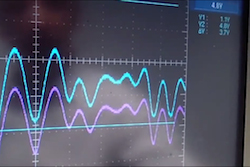 The envelope tracking (ET) market is set to exceed four billion units per year by 2018, fuelled by inclusion of the technology on 4G LTE smartphones and new Wi-Fi standards.

Envelope tracking is a means of modulating the power applied to the amplifier in a means to ensure a product is operating at peak efficiency.

Research from the ET chip company Nujira predicted the market will make $3 billion (€2.4 billion) during the next five years.

The chipmaker said the handset market has grown rapidly since the first ET-enabled smartphone was released last year. Fifteen flagship LTE smartphones are now in the market, including devices made by Apple, Samsung, LG/Google, HTC, Sony, ZTE and Amazon.

According to the manufacturer, smartphones alone will account for 125 million chip shipments this year, with the company expecting the chips moving down into the mid-tier smartphone sector during the next two years.

Tim Haynes, CEO of Nujira commented: “The adoption of ET this year into all flagship smartphones shows that key OEMs have recognised the value of integrating ET into their devices. The continued roll-out of 4G LTE networks, including TD-LTE in China and the move to LTE-Advanced, will further reinforce the requirement for ET across the world.”

Nujira said another area where ET technology will grow is in the low power integrated circuit sector. It said these CMOS chips will experience “significant” growth during the next five years, thanks to falling costs, increased amounts of front-end integration and consolidation among supply chain players.

It added these falling costs would help stimulate adoption of the chips in the Internet of Things sector, entry level smartphones and products such as 802.11ac Wi-Fi.

Christopher Taylor, Director of the RF & Wireless Components advisory service at Strategy Analytics cpmmented: “With widespread adoption this year, mobile device manufacturers are waking up to the potential of ET. The report from Nujira paints an interesting picture of the changing landscape of the RF front-end market.

“It’s clear to see that whether as a standalone chip, integrated with a CMOS PA, or ultimately into the cellular chipset, ET will rapidly become a critical enabling technology for the next generation of high data rate wireless communications.”