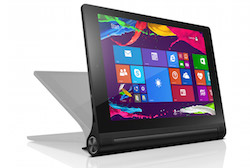 Lenovo, Panasonic and Kodak have been some of the first to make device announcements at CES 2015, including an ultra high-end smartphone, a wireless projector and Firefox-enabled television.

The Lenovo Yoga Tab 2 features AnyPen technology that reacts to any metal object to allow users to navigate the device as they would with a stylus.

Headline features include a 20MP primary camera with autofocus, a 5-inch 1080p display and 64GB internal storage, expandable up to 128GB via micro SD.

Also on board is a battery that Lamborghini claimed is good for up to 35 hours of talk time, or 1000 hours on standby.

Raj Talluri, Senior Vice-President of Qualcomm Technologies, said: “88 Tauri is the latest example of our successful cooperation with Tonino Lamborgini Mobile, and we are happy to see our premium technology powering the latest in the world of luxury smartphones.

“The latest Snapdragon 801 processor offers new levels of performance, productivity and power efficiency, allowing a seamless and smooth user experience that helps 88 Tauri stand out in any crowd”

The phone runs a custom version of Android 4.4 KitKat and, as would be expected from a Kodak device, puts imaging as the forefront, featuring a 13MP main camera with dedicated management software and a 5MP front-facing lens.

The IM5 will be available in Europe from the end of Q1 2015, Kodak said, with other markets to follow

Panasonic said the partnership provided an open platform that could leverage the full potential of HTML and web technologies already prevalent on PCs and other devices, providing full web compatibility while opening the system up to developers for the creation of new apps and services.

Meanwhile, ZTE proved to have a unique offering on its hands in the form of the Spro 2 –  an Android-powered pico projector offering 720p output for images up to 120 inches, while also doubling as a portable 4G hotspot.

Smartphones, tablets to be the “go-to device” for going online