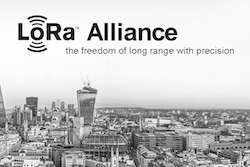 A new consortium has been launched to help enable the Internet of Things (IoT) with a new global standard for Low Power Wide Area Networks (LPWANs).

The LoRa Alliance said it hopes to guarantee interoperability between operators by standardising a new protocol called LoRaWAN, which allows networks to connect multiple applications into the same infrastructure without the need for numerous local installations.

The Alliance, which launched at CES, claimed that LoRaWAN was key to enabling new applications for IoT, M2M and smart city applications by encouraging the mass adoption of low-cost, long-range M2M connectivity.

LoRa already includes a number of high-profile names from the telco and computing industries, including IBM, Cisco, Swisscom, KPN and Proximus.

IBM revealed it had already released an open source specification for developers.

“In addition to IBM’s support of the LoRa Alliance, we have also released the IBM ‘LoRaWAN in C’ as open source under the Eclipse Public License, which provides a solid foundation for the development of a broad range of end devices compliant with the LoRaWAN specifications.”