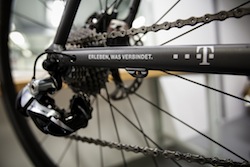 The bicycle, which was unveiled at the Eurobike expo in Germany, contains sensors that can detect when riders have been in an accident and send out an alert containing GPS data to emergency services.

A built-in communication unit, which Deutsche Telekom says is the size of a small ruler, contains a SIM card, microcontroller, movement sensor and GPS model.

The system is based on an end-to-end solution already in use at T-Systems in its Connected Car business.

On-board sensors can detect heavy impacts combined with rapid loss of speed and the bike lying on its side. If the rider doesn’t respond to an alarm signal sent to their smartphone, the on-board unit sends an eCall to the emergency services, who can then send out the nearest accident response unit.

The bike, dubbed Knight Rider after the US television series, uses M2M communications to ensure the alert data arrives quickly and successfully.

In the event of the bike being stolen, the owner can track its location using GPS in using the accompanying smartphone app or via the web interface and inform the police.

The bike can also calculate the condition of various parts of the bike based on the distance covered and load. This information is then transmitted to the T-Systems cloud platform so that the rider can monitor the condition of the bike and determine when its next service is due.

The bike is due to enter a pilot phase lasting “several months” in early 2015, during which selected partners will put it through its paces.