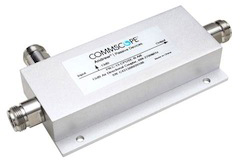 CommScope has announced a new range of passive components designed to boost the quality of wireless networks by limiting unwanted radio frequencies.

For example, a single decibel drop in uplink sensitivity caused by PIM can reduce wireless coverage by 11 percent, according to CommScope.

Philip Sorrels, VP of Strategic Marketing at CommScope, commented: “The message about PIM is spreading across the wireless industry, but its importance is hard to overstate, especially in LTE rollouts.

“LTE is an interference limited system, meaning its performance is only limited by how much interference appears in the network. A leading risk for interference in LTE networks is, of course, PIM.”

The company believes its new devices, which are designed for in-building application, will provide operators with a cost-effective means of maintaining solid network performance in distributed antenna system (DAS) applications.

“The more frequency bands, technologies and operators that a DAS needs to support, the greater the chance for generating PIM. Each component in the network is involved.”

The DAS market has recently seen a boost thanks to the rise of small cell networks, with the technology being used to fill the gaps in coverage.

In May, research by Infonetics reported that DAS equipment pulled in €1.4 billion revenue in 2013.