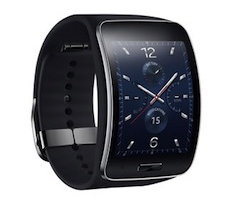 Samsung Electronics has unveiled Gear S, the latest product in its ever-growing smartwatch lineup, which allows users to make calls over 3G.

Users can place or receive calls directly from the device, which also includes Bluetooth 4.1 and WiFi 801.11 b/g/n connectivity and can send receive text messages, emails and view similar notifications.

It runs on Samsung’s Tizen operating system, which was launched in June, and the manufacturer said it would be looking to implement its OS on a range of devices other than smartphones, citing wearables, robotics and connected cars as potential recipients.

Other features of the Gear S include a curved 2-inch display using Samsung’s Super AMOLED technology, a flexible wristband and 1GHz dual-core processor.

The Gear S will go on sale in global markets in October. No word on pricing was given.

Announced alongside the Gear S was the Gear Circle, a set of Bluetooth-enabled headphones that can be worn like a necklace when not in use and can receive calls, stream music and register voice commands when paired with a smartphone.

JK Shin, CEO and Head of IT & Mobile Communication at Samsung Electronics, said: “Samsung is leading this exciting and rapidly developing wearable category through progressive innovation.

“The Samsung Gear S redefines the idea of the smart wearable and the culture of mobile communication. It will let consumers live a truly connected life anywhere, anytime.”