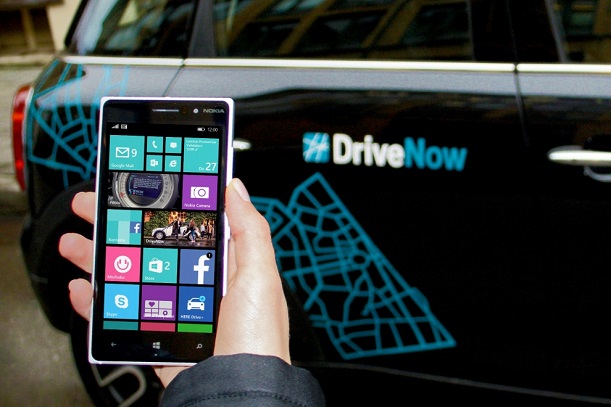 Operators have been under pressure to deal with traffic problems since the iPhone unlocked the promise of 3G data usage almost a decade ago. Not content with just dealing with that, Vodafone is turning its attentions to our roads, working with car rental service DriveNow.

At first glance, the BMW-backed car rental service, seems incongruous. Why would a car company encourage its customers not to buy a car?

Yet, this is precisely what has happened in Germany, one of the five countries the service operates in. DriveNow started there in 2011 and is now present in five cities around the country. Recent research found 38 percent of Germans have put off buying a car because they use the service so often.

DriveNow has a fleet of cars parked across a city. A customer can find one nearby using an app, which also gives them details about its model, fuel, tyre pressure and transmission. When hired, the car unlocks via text message. A customer can drive off and pay for the journey on a prepay basis or buy packages of up to nine hours - a three hour rental costs £35. When they are done with the car, they park it, end the reservation using the in-car software and walk away.

The ease of use has been identified as its USP but Joseph Seal-Driver, DriveNow's UK CEO and solid example of nominative determinism, says making the network operate smoothly is "incredibly difficult". He says: "We need to know the tyre pressure, where the cars are, how much charge is left and so on. Vodafone allows us to communicate with vehicles and understand how they work in urban environments."

The company uses Vodafone's GDSP machine-to-machine network. Each car is equipped with a SIM that transmits key data into DriveNow's back office systems so the company knows where a car is and what state it is in. Given the small amounts of data each car sends, it can fall back from LTE onto 3G and 2G networks without causing problems for DriveNow.

The partnership between the two companies is simple, although both parties hope it can be developed further to demonstrate the potential of the Internet of Things.

Seal-Driver excitedly talks of eventually being able to customise a car according to a customer's needs, so when they enter the car, a playlist is ready, and the wing mirrors and seats have been adjusted accordingly. Another hope is one customer "handing off" a car to another, or a driver getting favourable rates if they are deemed a safe road user, although he notes the latter raises privacy concerns.

As for Vodafone itself, the technology could help how the city operates. Phil Skipper, the operator's Head of M2M Business Development, says: "If you want to run a city you need to have good sources of accredited data. You need to have a policy in place where the data is maintained and used in an appropriate way."

Enter telcos. As his colleague Matt Key notes, it already helps satnav operator TomTom with traffic issues. Vodafone's Commercial Director for M2M explains how it can inform TomTom when there is a critical mass of Vodafone users in a small area, which suggests an incident, traffic jam or something else for road users to avoid.

Seal-Driver is also excited about the transformative potential. He says: "Cities don't really understand how people move. They do from a London transport perspective but we can provide clear data to the boroughs about parking and movement by the time of day, by week or by month. This builds up into a pattern about how people move and how they use the service."

However, DriveNow is just one player on roads boasting Uber taxis, rental cars, and Boris bikes, let alone the more traditional road users. While signing up 12,000 customers in London since it launched late last year is impressive, it is far from enough to dictate traffic policy on its own.

Seal-Driver is at pains to stress how drivers aren't tracked, but could he combine DriveNow's anonymised data with other kinds of road users to paint a better picture of how traffic flows or jams? He is sceptical, saying he'd be keen to avoid a situation where a third party aggregator skims cash off the top, like Skyscanner does with flights, for example.

These issues around data and who profits from it show the stumbling blocks that remain as industries become more mobile. If anything, it's simpler for Vodafone. As Key remarks: "Our principle is to connect anything anywhere." DriveNow is just one stop on that journey.