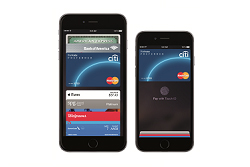 Mobile payments made using NFC will account for $130 billion (€105 billion) of consumer retail spending by 2020, according to data and analysis firm Strategy Analytics.

According to the company, the launch of new m-payment services such as Apple Pay and growing demand for mobile payments from consumers are stimulating the adoption of NFC-enabled merchant terminals and driving NFC transactions.

Strategy Analytics said the figure equates to 254 million mobile users making five NFC payments per month, at an average of just under $9 (€7.30) per transaction.

Asia-Pac will account for the largest share of total spend at 43 percent, followed by North America (31 percent) and Western Europe (21 percent), the company forecasted.

Apple Pay and MasterCard were noted as particularly strong drivers of NFC m-payments.

Nitesh Patel, Director of Wireless Media Strategies, said: “The launch of Apple Pay is significant because it means all major smartphone vendors support NFC-based mobile payments, but it also provides a credibility boost for the NFC payments sector as a whole.

“Furthermore, continued efforts by payment networks, for example MasterCard, has set a target of all MasterCard payment points supporting NFC in Europe by 2020, will be crucial in stimulating its use and adoption.”

Nevertheless, the firm added that total sales through NFC represented only “a single digital share” of a global multi-trillion dollar retail sector forecast for 2020, with cash and card payments remaining dominant.

David MacQueen, Executive Director of Media and Apps, commented: “We don’t expect consumers to begin to leave their wallets behind until NFC POS becomes ubiquitous towards the end of the forecast period. Even in countries like Japan and Korea, where contactless payment initiatives have been established for longer, mobile payment co-exists with cards and cash.

“In order for NFC-payment to gain strong traction…NFC-payments must add greater convenience for consumers, such as merging payments, loyalty point accumulation and coupon redemption into a single tap, while providing a platform for retailers to drive sales via targeted marketing or cutting costs.”

Telenor launched its new NFC-based payment system in Norway last month, while in the UK, Vodafone launched its own SmartPass m-payment tech at the same time with minimal fanfare.

However, while systems such as Apple Pay could drive the uptake of NFC payments, a report from Juniper in October claimed that operators could find themselves on the outside looking in, with a growing appetite for HCE-derived services threatening to cut them out of the game entirely.