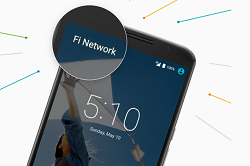 Google has launched its own wireless service that aims to offer users ubiquitous coverage through a combination of cellular and Wi-Fi connectivity.

Project Fi, which is only available in the United States on Google’s Nexus 6 handset, uses specially developed technology to automatically switch between Wi-Fi and cellular networks depending on the strongest connection available in the area.

Wi-Fi connectivity is provided through more than a million free public hotspot locations, which Google claims to have verified itself. According to the company, mobile data is automatically encrypted when users connect through open hotspots.

Google has partnered with both Sprint and T-Mobile US to allows users to take advantage of whichever of the two operators’ networks is delivering the best speed at any given time. When moving between Wi-Fi and cellular, Project Fi is able hand over connections “seamlessly” to ensure users’ calls are not dropped, Google claimed.

Additionally, telephone numbers are stored on the cloud, allowing customers to call and text on any device that supports Google Hangouts.

Google is currently offering Project Fi via an early access program in the US, with the company giving no indication as to whether the initiative will be expanded overseas.

Tariffs start at $20 (approximately €18) for basic call and text services. Users then pay an extra $10 per month for every gigabyte of additional cellular data they desire.

Nick Fox, VP of Communications Products, said: “As mobile devices continually improve how you connect to people and information, it’s important that wireless connectivity and communication keep pace and be fast everywhere, easy to use, and accessible to everyone.

“Similar to our Nexus hardware program, Project Fi enables us to work in close partnership with leading carriers, hardware makers, and all of you to push the boundaries of what’s possible. By designing across hardware, software and connectivity, we can more fully explore new ways for people to connect and communicate.”