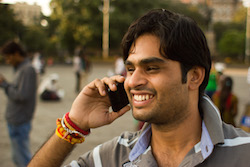 The Global mobile Suppliers Association has increased its prediction for 2015 LTE deployments, as appetite for LTE-Advanced and VoLTE is on the rise.

The trade group forecast that there would be 460 commercially launched 4G networks by the end of the year, compared to its original projection of 450.

Currently there are 644 operators investing in LTE across 181 countries, comprising 607 firm commitments to deploy and 393 launched networks. In a further five countries, there are 39 pre-commitment trials ongoing.

The GSA found 1800MHz has remained the most popular band for 4G, with 176 networks using the frequency in 86 countries, up almost 50 percent during the past 12 months. In total, 45 percent of all LTE deployments sit on the 1800MHz band.

Alan Hadden, VP of Research at the GSA, said: “Interest in VoLTE has surged and over twice as many operators are investing in VoLTE compared to a year ago. Fourteen operators have launched HD voice service enabled by VoLTE in 7 countries, compared to only three launched in March 2014. Many more launches will happen in 2015.”

The report also found that demand for TD-LTE was increasing, especially in China. It said 54 operators have now launched the technology in 34 countries, with 2.3GHz the most commonly deployed frequency.

Elsewhere, 10 operators have now launched LTE to consumers using the APT700 band, a frequency that is seen as potentially ensuring harmonised connectivity. In total, 42 countries are examining the band, with a potential to connected up to four billion people. There are 76 devices that are compatible with the frequency.