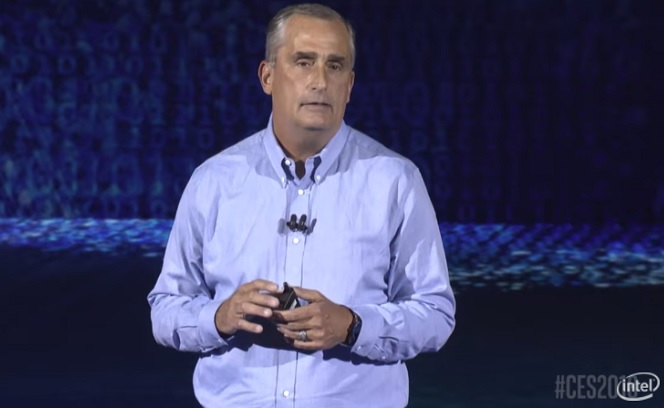 Intel’s CEO Brian Krzanich attempted to draw a line under the company’s well-publicised security problems in his CES keynote as he unveiled new connected car and VR projects.

The company hit headlines earlier this month after researchers found security vulnerabilities affecting a large number of chips from Intel and other manufacturers.

Termed Spectre and Meltdown, the flaws could allow hackers to access information from computer processors without authorisation and affects devices made by the likes of Apple.

Speaking at the event in Las Vegas, Krzanich said the company had received no information indicating the exploits had been used to obtain customer data.

“We’re working tirelessly on these issues to ensure it stays that way,” he said. However, he urged customers to apply any updates sent by operators or manufacturers as soon as possible.

Krzanich said 90 percent of chips will receive an update within a week of the event while the remainder will be updated by the end of January.

He said the update’s impact on performance would be “highly workload dependent”, and would affect some devices more than others. He said Intel will work with other parts of the industry to reduce this impact.

Segueing into more positive areas for the company, Krzanich announced that two million BMW, Nissan and Volkswagen vehicles are set to use software from Intel’s subsidiary Mobileye, which it acquired in 2017, to collect road experience data to build high definition maps.

The company also signed new partnerships with Chinese automaker SAIC Motor and digital mapping company NavInfo to collect the same data within the Chinese market. As part of the deal, SAIC will develop autonomous vehicles based on Mobileye technology.

Intel has also signed a partnership with Ferrari North America that will see the Ferrari Challenge motorsport event using its Xeon processors and deep learning technology to collect and stream video from the event, as well as mine the resulting data for insights.

Elsewhere in the presentation, Krzanich revealed that the company is launching its own studio for volumetric content, an emerging technique which creates a 360 degree image of an object using an array of cameras. Called Intel Studios, the unit will create both VR and non-VR content.

Intel will also deploy its True VR technology during the Winter Olympics in PyeongChang in February. The company will work with the event’s rights-holders to capture 30 Olympic events and show them both live and on-demand through an NBC Sports VR app.

Krzanich said: “We are still discovering new ways to apply the power of AI and data. These discoveries will impact nearly every sector of innovation, and Intel is at the forefront of this revolution, bringing to life the promise of data-driven experiences through autonomous driving, AI, 5G and VR.

Samsung to open up IoT devices amid CES launches