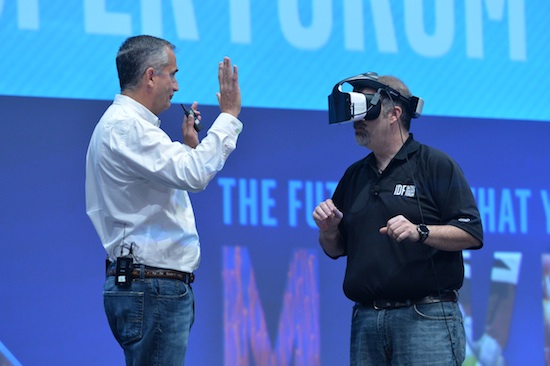 Intel has announced a wireless virtual reality (VR) display unit at its developer forum in San Francisco, which carries all its computing power within the headset itself.

The device, called Alloy, uses cameras attached to the headset to do away with the need for complex set-up of external cameras and sensors around the room, and enable the user to experience VR untethered.

The company said “cutting the VR cord” will usher in a new ear of “merged reality”. The same camera technology underpins a variety of new Intel products and applications, including a new compute module for the IoT market.

Headlining its announcements at its developer forum, Intel’s new Alloy device combines collision detection and avoidance, so users can blend virtual and physical realities in a combined experience. “Through merged reality, see your hands, see your friends… see the wall you are about to run into,” the company said.

“With increased mobility, integrated tracking and highly sensing human motion capabilities, merged reality will profoundly impact the way we work, how we are entertained and how we communicate,” said Intel CEO Brian Krzanich.

Intel will open the Alloy hardware and provide open APIs for the ecosystem in 2017.

Based on its RealSense technology, the brains behind its consumer VR proposition, Intel also unveiled a number of other products and applications designed to provide intelligent machines with 3D perception.

Among these, its new Joule compute module, a maker board with a RealSense depth-sensing camera, is targeted at internet of things (IoT) developers, entrepreneurs and enterprises, enabling them to take a concept from prototype to production more quickly and cheaply.

Microsoft and General Electric used Intel’s IDF event to demonstrate applications of the technology. French company PivotHead, which specialises in eyewear with embedded cameras for industry, has used the module to build augmented reality safety glasses for Airbus employees.

Two versions of the platform, along with a developer kit, start shipping in September.

In parallel, Intel released a number of developer kits for RealSense camera applications, including a robotics kit, shipping next month, which incorporates a Linux-based AAEON UP board and enables developers to build robot prototypes that can recognise objects or people and navigate an environment.

Further, Intel announced a pair of RealSense cameras: the ZR300, available at the end of the year, is designed for autonomous robotics and drones, and for virtual and augmented reality; its new 400 Series cameras have twice the operating range and capture twice the 3D points per second of previous models.

Intel also released a developer kit for its Euclid plug-and-play device, which integrates sense, compute and connect capabilities by virtue of a RealSense camera, an Atom processor and wireless connectivity. It is targeted at researchers, makers and developers in the robotics field.

Ore-orders are now live, the company said, for its Aero kit for drones, which runs an Atom quad-core processor and combines compute, storage, communications and flexible I/O in a playing-card sized unit. The platform is available with an optional camera kit, for development of sophisticated drone applications, or as a fully-assembled ‘ready-to-fly’ “quadcopter”, supporting a number of plug-and-play options.

Meanwhile, Intel said its Yuneec Typhoon H, which can navigate obstacles by itself, and plot alternative routes, is available now for $1,899.