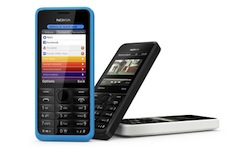 The Finland-based vendor unveiled the Nokia 301 costing just €15, aimed at first-time smartphone owners in developing countries, as well as the Lumia 520 and Lumia 720 aimed at high-end tech savvy users.

In particular, Nokia pinpointed functionality including a new double camera with handy self-portrait tool, HD voice and faster video streaming as key features to improve device satisfaction, no matter how much users are able to pay for the device.

But as smartphone penetration increases, so do concerns about the impact such devices are having on the network.

As Mobile Europe reported in January, a survey by Strand Consult found that up to 70 percent of bad coverage could be caused by smartphones.

“Optimising phones for networks takes a back seat to getting phones to market,” the report noted.

So who is to blame?

According to Thorsten Robrecht, Nokia Siemens Networks’ Head of Portfolio Management for Mobile Broadband, there is some credence to the claim that smartphones might by causing network issues.

“Signalling is a really big problem and typically the big phone companies are very supportive of our testing initiatives and they see the value of what we are offering,” he told Mobile Europe.

“We have been able to catch the problem with the devices before they go onto the market over the last three to four years. Out of the hundreds of devices we have tested and evaluated, we have discovered issues causing problems to the network in terms of 3G signalling in tens of devices.”

Orange admits that devices have variable performance on several parameters, particularly radio performance and battery life, although they declined to specify which devices have this problem when interviewed.

“Radio performance is a parameter that we measure and take into account when selecting or promoting a device,” Thierry Bonhomme, EVP of Orange Labs, Networks and Carriers told Mobile Europe.

“We provide to our suppliers recommendations and information on the network features and configurations that we intend to use in our networks so that they can optimise their devices. For example, we have worked on features to optimise mobile data capacity and exchanged [this information] with device suppliers.

“We also perform tests of the chipsets and devices in lab conditions and in real network conditions; for example a few years ago, with the HSPA dongles, we had to choose between a device that was cheaper but which had a higher impact on network capacity and one that was optimised for network capacity. And that choice had to be made country per country and market per market.”

“We have discovered that if many users are using a particularly popular social networking application at the same time and pinging the network with their statuses and check-ins 20 times a minute, then this can cause massive congestion,” he said.

“If you have a ‘proper’ OS, it should be able to filter the requests away. But if your OS doesn’t work properly, then you can totally destroy the network.”

It’s all about the antennas

Tommy Ljunggren, Vice President of System Development, Mobility Services at TeliaSonera, adds the Scandinavian operator encourages manufacturers to invest in R&D around the antennas for their smartphones to improve the overall user experience.

“We also co-operate by providing the vendors with information about their mobile phones performance in our network,” he said.

According to device testing firm Anite, four antennas will become the norm and more research needs to be done into Multiple-Input Multiple-Output (MIMO) technology.

MIMO is a wireless technology that uses multiple transmitters and receivers to transfer more data at the same time in 802.11n-enabled smartphones, and allows antennas to combine data streams in a multi-path to increase receiver signal-capturing power.

“Achieving maximum throughput with MIMO requires low correlation between antenna signals. The key challenge is how to get two or even four antennas to fit the small form factor and still maintain sufficient difference between signals.”

“Manufacturers are trying to jam more radios into smaller and smaller packages for smartphones and this forces a compromise on the antennas used to send and receive signals,” he said.

“Over-the-air testing of mobile phones is very common, but it is expensive, time-consuming and difficult to get right. Some device coverage issues have been traced back to poorly performing antennas.”

“What is important is that between network manufacturers, chipset makers, device manufacturers and operators share our understanding of what contributes to customer satisfaction and cost of delivering the services, so that we can all optimise our contributions,” he said.

The France-based mobile operator has found that customers’ perceptions of bad coverage come from how good coverage is on high bit-rate data services, such as web traffic, as well as coverage on high frequency bands.

TeliaSonera’s Ljunggren agrees: “The industry as a whole needs to take responsibility, and I think most companies do. Customers will not buy terminals from a vendor that manufactures bad phones or an operator that has bad coverage,” he said.

“Some smartphones perform better than ‘normal’ phones and some worse. There are even differences between different models from the same vendor, so you cannot say that one vendor is better or worse than another.”