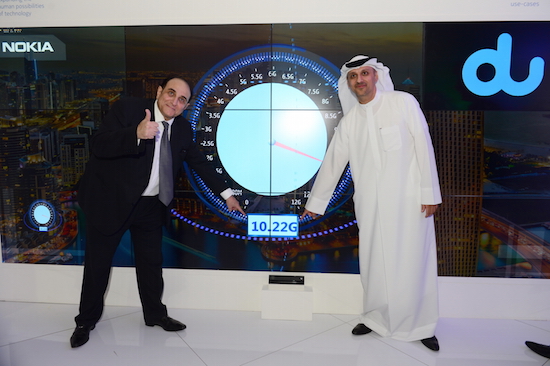 Nokia and du have demonstrated a new 5G radio system capable of achieving speeds of 10GBps as part of a new partnership.

The two companies have signed a Memorandum of Understanding (MoU) under which they will explore the possibilities of “ultra-broadband” for applications including eHealth and 4K ultra-high definition video.

As part of the MoU, Nokia showed off a new 5G radio system proof-of-concept (PoC) developed in collaboration with National Instruments at this week’s Gitex Technology Week in Dubai.

According to the vendor, the PoC uses high bandwidth “smart” antennas and multi-carrier modulation technology that allows to ultra-low lately and peak data rates of 10GBps.

Nokia and du aim said they aimed to demonstrate how such technology can be used to for 5G applications “that use massive broadband capabilities”, such as those within smart cities, healthcare, entertainment and automotive.

The two companies have also agreed to collaborate on trials of Centralised RAN, multi-vendor SON, IoT and HetNets.

Saleem Blooshi, Executive Vice President of Network Development and Operations at du, said: “Bringing a 5G prototype to [the UAE] is an initial step that will ensure the rapid realisation of our smart city ambitions and reaffirm our commitments to addressing its extensive requirements.”

Tony Awad, Head of du Customer Team at Nokia Networks, added: “We’re collaborating to share our experience, skills and expertise to accelerate developments in 5G and IoT technologies, and the network evolution.”