Nokia gets busy with LTE-A, 5G 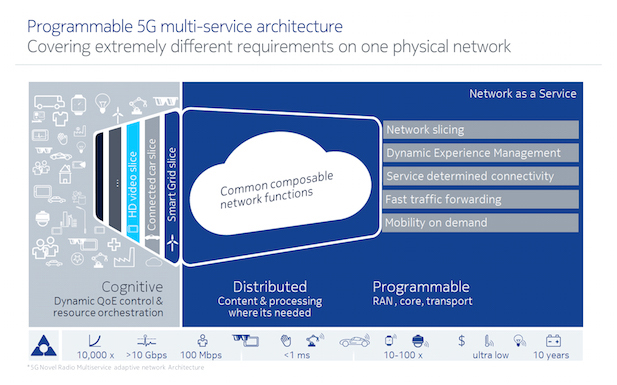 The vendor claimed it had hit a new benchmark after reaching data speeds of 375Mbps in a trial of LTE-A with TeliaSonera.

The “record-breaking” speeds were demonstrated on a live network in Helsinki  using three-band LTE-FDD carrier aggregation and Category 9 LTE devices.

For the trial, Nokia combined spectrum from two 20 MHz carriers in the 1800 MHz and 2600 MHz bands and one 10MHz carrier in the 800MHz band. Nokia said this was a “typical” bandwidth combination for European mobile operators.

TeliaSonera, which recently deployed and LTE-A network in Denmark, said it would continue to roll out LTE-A services once compatible Category 9 devices become “available in sufficient volumes,” presumably next year.

Timo Hietalahti, Head of Architecture and Development at TeliaSonera Finland, said: “Our main priority is to offer our customers faster access to high quality video and more responsive data services.

“Through this groundbreaking trial of 3X CA our network has delivered high data throughtputs with superior reliability, meaning our customers will benefit from superfast multimedia applications and services once the technology is rolled out commercially.”

The Finnish vendor has also been busying itself with a new network architecture for 5G.

Nokia Networks, which is currently involved in a number of 5G initiatives, is pushing its concept for a new, flexible network that adapts in real-time to meet the demands of different services.

According to Nokia, the architecture leverages a combination of self-organising Networks (SON) and software-defined networking (SDN) technology that automatically adapts to varying service requirements and the needs of different network “slices”, as well as end-user needs.

The vendor also plans to introduce a programmable API that will enable virtualised core network elements to adapt in real-time, allowing it to adjust to newly-added network slices and mobility requirements on-demand.

Volker Ziegler, Chief Architect at Nokia Networks, claimed that industries would be able able to use network functions as and when they need them as a result, thereby opening up new “Network-as-a-Service” business models for operators.

Ziegler said: “With our cognitive and cloud-optimised architecture for the 5G era, we have outlined an end-to-end architecture that will allow unprecedented and cognitive customisability to meet stringent performance, security, cost, and energy requirements.”

Elsewhere, Nokia has also been trialling carrier aggregation in Asia, where the vendor demonstrated the region’s first TDD-FDD 3 CA on a commercial chipset.

Nokia said it achieved peak download speeds of 365Mbps by combining 20MHz of LTE FDD band 1 frequency and 40MHz of TD-LTE on band 41.

Aidy Zhang Qi, Vice President of TD-LTE at Nokia Networks, said: “This demonstration is a strong confirmation of Nokia Networks’ commitment to take the lead in commercialising TDD-FDD convergence. It also substantiates the industry-leading capabilities of our portfolio, which is tailored to help operators utilise FDD and TDD to optimise network coverage, capacity and throughput.”