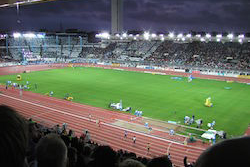 Both operators saw upload speeds boosted over two and a half times after Nokia ran its solution over their networks during events at the Hartwell Arena in Helsinki and ITU Telecom World in Qatar.

Nokia’s Centralised RAN eliminates uplink congestion by turning interference caused by “extreme load conditions” into useful traffic. The technology is built on the vendor’s Flexi Multiradio 10 base station equipment, which interwork directly over fibre optic without the need for additional network elements.

Nokia claimed the technology allowed up to 10 times faster uploads at the cell edge. It also said it boosted smartphone battery life up to a third as it meant devices no longer needed to operate at high power to fight interference.

The vendor explained the solution was particularly well-suited for mass events, where there is more uplink than downlink traffic as users upload video and pictures online.

Sami Komulainen, VP of Mobile Network Services at Elisa, said: “We continuously search for new ways to improve our services furthermore. Our co-operation with Nokia guarantees fast LTE-network also in big mass events and our customers can share their experiences in social media.”

Elisa also used Nokia’s Flexi Zone technology in a separate trial of hotspot technology at its flagship store in Helsinki.

Nokia said its micro and picocell solution lowered overall costs by 30 percent compared to traditional small cells by offering macro parity, which bridges the gap between small and macro cells for smoother coordination and traffic handling.

The trials follow a further collaboration between Nokia Networks and Ooredoo. The two companies worked with China Mobile this week to test speeds of 4.1GBps via carrier aggregation.