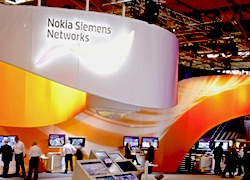 Nokia Siemens Networks has completed a series of tests where mobile voice core services run in a telco cloud environment and has declared that its cloud technology is now “on the brink of commercial deployment”.

Last year, the vendor demonstrated several proof-of-concept projects that aimed to identify telco-specific requirements for cloud computing by providing a foundation for the core network element software that runs on top of a virtualised infrastructure.

Using an industry-standard virtualisation and cloud management infrastructure as well as off-the-shelf commercial IT server hardware, the NSN said it was able to verify the automated deployment and elastic scaling of virtualised network elements, live migration of virtual machines from one server to another, as well as the recovery from hardware failures.

“The range of test cases we ran during the pre-deployment verification phase underlines the essential role of the OSS components in the Telco Cloud,” said Peter Patomella, vice president, Operations Support Systems at Nokia Siemens Networks.

“We’ve shown how the complete lifecycle of a network element can be managed remotely via our OSS – including initial network element cloud deployment, monitoring of virtualised VoLTE application resources, and elasticity management.”