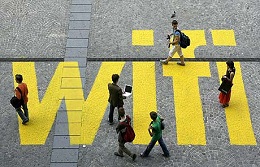 Japan Airlines will be the first to test the service next year. Gogo is also planning to install so-called Ground to Orbit (GTO) low-profile antenna technology for aircraft travelling across North America.

However, instead of using Gogo’s Air to Ground tech for the return link to the ground, the new 2Ku service will use two low-profile, high efficiency Ku-band satellite antennas.

Gogo’s president and CEO Michael Small said: “When we launched our in-flight internet service five years ago, we were able to deliver peak speeds to the aircraft of 3.1MBps through our air to ground network. About a year ago, we began deployment of our next generation ATG-4 service, which took peak speeds to 9.8MBps. Our GTO solution takes the peak speed to 70MBps in the US and 2KU brings 70MBps to the rest of the world.”

Gogo said its 2Ku antennas are around twice as spectrally efficient than others in the aircraft industry, which it said would produce extra bandwidth much cheaper. Because the antennas are only 4.5 inches tall, Gogo said this would reduce drag on an aircraft compared to rival products.

The company is aiming to launch the service commercially by the middle of next year. It said the 2KU antenna is compatible with Ku satellites and forthcoming spot beam satellites. This wider compatibility makes the Wi-Fi service more reliable because it does not have to rely on a single satellite for connectivity, according to Gogo.

“We anticipate that this technology will deliver peak speeds of 70MBps to the plane when initially launched and more than 100MBps when new spot beam technologies become available,” added Gogo’s CTO Anand Chari.

Satellites are increasingly being used as a means of connectivity. Project Hydra, a private secure satellite network for the UK emergency services, launched last week. Facebook is also looking to use satellites to connect people without any internet access.