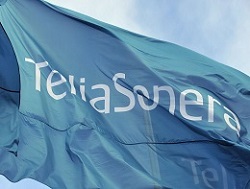 Nordic operator TeliaSonera has bought 4G LTE licences in Finland for €41.2 million to boost coverage in the country.
The operator has secured 2 x 10 MHz in the 800 MHz band which is valid for 20 years starting from 2014.
The first operator in the world to launch a consumer ready LTE service in 2009, TeliaSonera has already built its 4G LTE network on the 1,800 MHz and 2,600 MHz frequency bands and currently covers 40 percent of the population.
The newly-acquired licences include the requirement that the Nordic operators must achieve 95 percent 4G coverage in three years and 99 percent coverage in five years, where the coverage built in other frequencies is also included.
The auction, which started in January this year, was held by Finland’s Ministry of Transport and Communications Ficora. The operator will pay the licence fees in instalments over the next five years.
In May, TeliaSonera’s Estonian subsidiary EMT was awarded frequencies in the 800 MHz band in a beauty contest arranged by the Estonian Technical Surveillance Authority.
The Tallinn-based arm had outlined plans to use the frequencies to boost its 4G LTE population coverage level to 95 percent by mid-June 2013.
TeliaSonera currently offers 4G LTE services in nine countries including Sweden, Norway, Denmark, Finland, Lithuania, Estonia, Latvia, Azerbaijan and Moldova. It also launched 4G LTE services in Spain in July this year.
Share
Facebook
Twitter
Linkedin
Pinterest
WhatsApp
Previous articleEMEA leading the race in global millimetre wave equipment market
Next articleEfficient LTE spectrum utilisation in Europe: Which method is best?