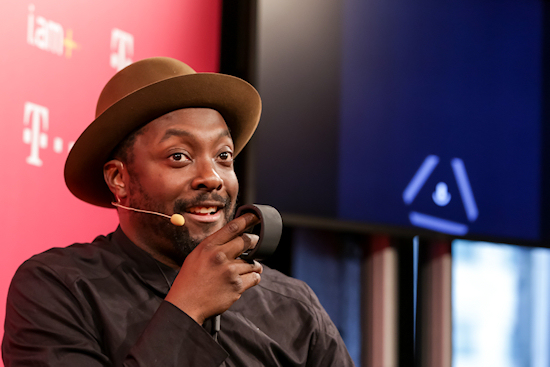 Will.I.Am has devoted his time outside writing ubiquitous chart-bangers to technology, through his i.am+ company. As he joined Claudia Nemat, Deutsche Telekom’s Board Member for Europe and Technology, and i.am+ co-founder Chandra Rathakrishnan on stage yesterday, the three stylish black-clad speakers unintentionally looked like a slimmed down Kraftwerk. Or a telco-tinged Black-Eyed Peas side project.

They were at pains not to describe the product as a smartwatch. Effectively that’s not quite the case; it’s a broad black armband with a two-inch screen, removal battery within the bottom half of the strap, front-facing camera and Qualcomm processor, which puts it in line with the likes of Samsung’s Gear range. Where it differs is it does not need to be tethered to a smartphone. Instead, it connects using a nano-SIM.

While the interests of a star can, and should, generate a degree of eyerolling – think Tom Hanks’ surreal interest in British football side Aston Villa or Keanu Reeves’ ill-fated grunge band Dogstar – Will.I.Am spoke with a palpable and somewhat surreal excitement about the product.

Smartwatches have yet to generate the high levels of demand that smartphones have. When asked why, Will.I.Am took the opportunity to talk horses and buggies. "I truly believe the reason why smartwatches haven’t taken off is because of the companies behind them," he said. "No-one is thinking about really dividing the line between the smartwatch and smartphone to be independent.

"It’s like having a horse and a buggy. Without the horse, the buggy is nothing. It just sits there. But then there’s the Ferrari. It’s on its own and has the real horsepower.

"We believe devices will be adopted when the OS and experience is built for that [standalone experience]."

At the heart of dial is AneedA, joining Siri, Cortana and Now in the personal assistant category. By talking to dial, the device can play music, phone contacts (you can listen to calls with Bluetooth earphones), give directions, find news and open apps, which the company is dubbing "skills", mercifully with the second ‘s’ not being replaced by a ‘z’.

The product’s ability to be entirely voice controlled is what Will.I.Am sees as its killer app. He claims it is a demonstrable step forward from the iPhone, which helped popularise touchscreen technology almost 10 years ago.

The panel was at pains to stress that AneedA learns more about your likes and dislikes the more you use it, and gets used to your voice. As with any live tech demonstration, the odd snafu occured. When asked "what music do you like?", AneedA responded "why do humans invent machines to destroy each other with?", a question that will no doubt put fear into those apocalyptically minded about artifical intelligence.

Then again, its music functionality impressed, being able to draw down playlists, songs and concerts without the need for dipping in and out of skills. At one point, AneedA was asked to play something that is "hot right now". It chose Pillow Talk by former One Direction star Zayn Malik, adding in HAL-like tones "Zayn with that Pillow Talk is on fire".

For Deutsche Telekom, Nemat explained the partnership helped add a new dimension to customer experience, and gave the operator the opporunity to work with "the smartest and most creative people" outside of the company. It is far from the first operator to get involved – i.am+ signed a deal with Three last week to sell dial in the United Kingdom.

Nevertheless, a lot of the news was kept under wraps. Exact release date, beyond a 2016 launch, remained unknown. How much would it cost, how the pricing structure would work and whether consumers would pay for it through a contract or could draw down existing data? All secret. The same thing went for exactly what music software it was using, whether Spotify, Tidal or Apple Music.

Skills will be available through a Skillstore, but again, launch of that was tbc. However, co-founder Rathakrishnan took that opportunity to highlight how the Skillstore would give developers the opportunity to build new kinds of applications, like a fully voice activated Uber, for example.

And what of AneedA his/her/itself? Is it cloud-hosted software that does all the heavy lifting away from the device? Exactly how does it learn? Again, it was left to Will.I.Am to answer it in his own unique style.