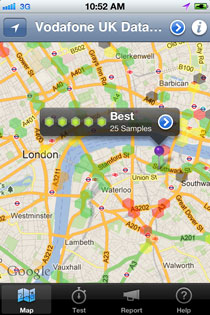 A year after the CarrierIQ controversy, consumers are now opting in to track their own usage, writes Keith Dyer.

The idea of gaining a customer-centric view of service quality has driven much of the investment and thinking around operators’ Customer Experience Management strategies.

Put simply, the problem for operators is this: they are aware that using network KPIs to determine consumer experience is unreliable at best, and misleading at worst.

The network operations team might be satisfied that a site is up and working, but a user in that site might be about to churn because he can never get good data access at home as he’s in a particularly poor micro-spot of coverage, for example.

But the poor old operator doesn’t know about it until the user leaves at the end of his contract.

To answer that, operators have taken a number of approaches. Many of these have been about crunching together data that sit in network OSS and are collected from network probes and monitoring systems, with “customer level” data, such as CDRs and the like, that sit in data warehouses. By doing a lot of number crunching, correlating dropped calls with known locations, device IDs and so on, the idea is that operators can build up a much better picture of what the user is actually experiencing. The end game, the big goal, is doing this in real time and presenting these data in an understandable manner to customer service teams, to marketing units, to the C Suite and to network operations teams. It’s big, big data with a big, big potential pay off.

Mobile Europe has, in the past, covered many of these approaches.

Alongside this network approach, one idea that has occurred to many is to put something on the device itself that can report back to a central data repository. Instead of sifting through reams of probe and signalling data to see what happened and why, a client or software agent on the device could instead feed information directly to back end systems – “this is my current uplink speed, and here is my location. This call just dropped.” That sort of information.

Indeed, you may remember that almost exactly a year ago there was a major brouhaha around CarrierIQ. That was a result of a perhaps misguided attempt to do something exactly like this. Carriers in the USA used CarrierIQ to put a client on the device that tracks the user experience. The issue was, they didn’t tell the users, and they made the app hard to find and get rid of.

But the device-side approach didn’t go away just because of the CarrierIQ debacle. Root Metrics, the company that provides mobile network service quality scores, thinks it has the ideal solution to provide operators with a consumer view of their world.

Root Metrics actually has a dual model. One side of its business is to provide a consumer “quality” app, supported by advertising. The other is to sell analysis of the data collected and mapped by these consumers to mobile operators, device vendors and other “ecosystem players”. The app currently has thousands of users voluntarily reporting their own user experience and location.

One difference between the consumer app ad something like CarrierIQ is that it does not work in the background – in other words, it only logs service quality information if the app is selected on the phone. This, Root Metrics said, is so the app doesn’t “take over” people’s phones, it also gives consumers the ability to control their own use of the app.

But Root Metrics doesn’t just give the app to consumers. It has its own team of testers walk-testing major cities in the UK. The company currently has six full time testers kitted out with standard off-the-shelf phones travelling round major urban areas, the commuter towns and villages that ring them and on the main transport routes between them. The aim is to provide a base level benchmark of data for 16 “markets” in the UK, covering 50% of the population.

As well as benchmarking networks, the company will also start to benchmark devices. The company says that there can be a 10-20% difference in performance of the same service in the same areas between different devices. That information could be used by consumers in their device selection, operators in their ranging decisions, and also by the device vendors themselves who can look at how their implementation of device software is affecting performance.

Root Metrics says that its initial reports often take the internal networks teams by surprise. The usual trajectory is to be met with scepticism, or denial that a certain issue that exists in the data is actually real. In that sense the data can be used as a means of benchmarking and checking performance in specific locations, against the assurances of the network ops team.

Although Root Metrics says it is the only company that does exactly what it does, there have been similar approaches. One example is Metricell, which had an app and services called Tracesaver available since April 2011.

Metricell also has operators in its sights as key customers, using the customer data its users provided to power customer service strategies. One customer at the time was the network owner MBNL. The company currently markets its offering to operators as NETCare, integrating the data feeds with customer care systems.

Red Bend is another company that offers operators the chance to use device-side software for monitoring and CEM purposes. Its vSense Mobile software requires consumer opt-in, and then monitors device performance according to configurable thresholds that are performed over the air, on predefined schedules. The device data, which amounts to no more than a few kilobytes, is automatically collected and periodically sent in the background over a mobile or Wi-Fi connection and aggregated in the Red Bend’s Analytics Centre. The client is only available for Android devices, however. As well as Red Bend’s consumer adoption approach, there are also engineering grade product such as Swissqual’s Qualipoc and Nemo Handy.

Mobile optimisation company Actix, although not a provider of this type of technology, says that it includes feed from such device clients in its optimisation algorithms. It says that client-side analysis is a key enabler of operators’ CEM strategies.

“The client side [approach] monitors how the network performance impacts handset performance (battery life), application usage, network experience and location. This is something that traditional CEM’s lack, and is very useful for customer care. It’s all about building up the complete picture rather than just a limited data source, whether that’s drive test or customer service information,” a statement from the company said.

A company such as Root Metrics, which presents one face to the consumer (“We’re a consumer advocacy company”, it told me) and one to the operator and industry, may be able to square the issues raised nearly a year ago by CarrierIQ – gaining user permissions to track service usage and quality, for the benefit of all. Even if there are those in network ops teams who might disagree.