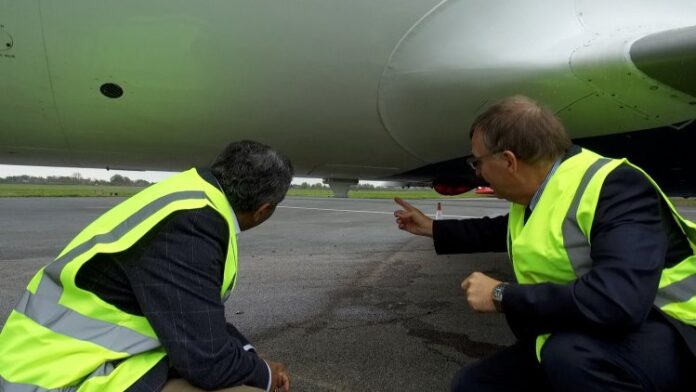 Deutsche Telekom and Inmarsat have completed a programme of test flights in the UK in the first steps towards establishing a European Aviation Network (EAN), an in-flight broadband network for the European aviation industry.

The EAN will combine a ground-based LTE network from Deutsche Telekom with Inmarsat’s satellite infrastructure to offer in-flight broadband across all 28 European Union member states. It will be introduced in mid-2017.

Recent flights have tested the performance of the EAN system including on-board equipment provided by Thales and a ground network provided by Deutsche Telekom and Nokia.

The operator said it has also achieved the first EAN live over-the-air connection, of a video conference, in Nokia’s laboratory in Stuttgart, Germany.

Both parties were connected by the dedicated EAN LTE mobile network, it said. Handover, connection and transfer were tested, with results “exceeding expectations”.

The LTE ground network for the EAN differs from regular LTE networks as it needs to work at speeds of up to 1,200 km/h, and at cruising altitudes that cell coverage must reach 150 km.

Nokia has adapted its LTE base stations and Remote Radio Heads (RRH) to the frequency used for EAN, provided by Inmarsat, and constructed a specific base station antenna to cover the sky.

Nokia will manage network operations from its delivery centre in Romania.

Claudia Nemat, Board Member for Europe and Technology at Deutsche Telekom, said: “The new technology based on the LTE standard makes sure that EAN is flexible for any further technology developments in the future. Deutsche Telekom’s aim is to drive technology leadership to bring best network experience to our customers.”

Leo Mondale, President of Aviation at Inmarsat said: “The actual performance and quality of the in-flight data-link exceeds design expectations and is truly game changing for European airlines. We look forward to further successful testing milestones working with all the EAN partners to bring together this integrated system.”