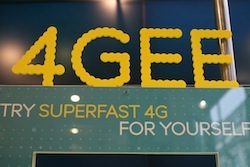 EE has announced that its 4G LTE service is now available in 50 UK towns and cities, and is also reaching half of the country’s population.

According to the UK mobile operator, the roll out is progressing “ahead of schedule” and 4G LTE has been switched on in 13 more locations including Leicester, Doncaster, Bradford, Lichfield and St Albans.

EE has had a head start on the rest of the operators in the UK as it was allowed to start its 4G LTE network last year by refarming the 1800MHz spectrum from Orange and T-Mobile’s 2G legacy networks, while other operators had to wait for the Ofcom 4G auction to start.

“With these major milestones of 50 towns and cities and 50 percent of the population, we’re remaining ahead of our schedule to equip UK consumers and businesses with 4G,” said EE’s CEO Olaf Swantee.

EE plans to roll out 4G LTE in another 30 towns and cities by the end of June.

Earlier this month, EE launched a TV and YouTube ad campaign to show how much faster 4G LTE mobile broadband was, compared to 3G.

Members of the public in several UK cities were asked to download music and access webpages on two Samsung Galaxy S3 devices, one on 4G LTE and the other on the legacy 3G network.

The download times were timed and showed that 4G LTE mobile broadband was at least three times faster in all instances.

This stunt followed some bad press the company received last November, when subscribers complained to the UK Trading Standards body about misleading “4G is here” advertisements in Portsmouth, which led to an investigation.

In the same month, tests by mobile data analysis firm RootMetrics in Manchester found that only 40 percent of the city had access to its 4G LTE network, with no coverage outside the city centre.

Subsequent tests by RootMetrics in February have found that EE’s 4G LTE speeds are more than twice as fast as 3G speeds in Liverpool, Cardiff and Sheffield.

EE’s rivals are expected to launch 4G LTE services in the summer.