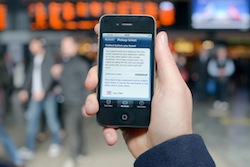 O2 has launched a train booking app as it looks to add value to its struggling mobile wallet service.

According to the UK mobile operator, customers will be able to save up to 80 percent on advanced fares with its Train Travel app as it doesn’t charge any booking or credit card fees unlike many of its competitors, such as The Train Line.

Train Travel is based on Atos’ Redspottedhanky app platform and available on any network.

Paper tickets will still need to be printed out from ticket machines at train stations using the debit card paid and entering the transaction code, although on several Chiltern Railway routes, digital tickets or barcode-represented tickets shown on a smartphone are now being accepted with O2’s app.

“Rather than going through the teething problems of developing something from scratch, taking an established ticketing platform and tailoring it for O2 means we’ve got access to all the timetable information, the ticket information and billing,” James Le Brocq, MD of O2 Money, told Mobile Europe.

Gartner research director Gyanee Dewnarain said the launch highlighted the fact that mobile payment functionality is not “ground-breaking” enough on its own to get consumers interested.

“If operators want to get people interested in mobile payment and mobile wallets and shape the user behaviour, then they will need to offer value-added services beyond what traditional payment methods offer, such as saving money, convenience and choice,” she said.

“As mobile wallets start offering customers value beyond what traditional payment methods offer (cost saving, deals and offers, convenience, loyalty points that can be converted into rewards such as additional voice minutes and SMS), it will become an interesting proposition for customers and has a high chance of being successful.”

New technology hopefuls will be disappointed that O2 has not gone down the route of using NFC for ticketing, which Samsung was heavily touting with its Cipurse solution at Congress (click here to read MWC 2013: NFC might not be dead in the water after all?).

Responded Le Brocq: “Any form of NFC services is of great interest to us. We will be looking to [UK m-commerce joint venture] WEVE to provide that single point of access for NFC services. So if you’re a bank and you’re interested in enabling your contactless card to become digitised on a mobile phone, we would expect that service to be made available through the joint venture.

“NFC is a great technology and what we’ve got to do is move it on to becoming a big part of consumers’ lives. The only way you can achieve that is to make it as available as possible, where it’s being offered by as many operators as possible.”

However, he added that given more money is spent on the high street than is spent online, any organisation that wants to be involved in mobile payment must consider both options.

The O2 Wallet is how O2 has been hoping to capitalise on both the “online” and “offline opportunities”.

Launched in April 2012, the service is available to any consumer over the age of 13, regardless of network, but due to technical problems, it has only been in regular use since November as the wallet’s app-based registration experience didn’t work and had to be replaced with a fixed web-based process instead.

In the last five months, O2 has seen positive results from the mobile wallet, with the most popular features being the Money Messaging service, where consumers can send money from one mobile number to another; and the Shopping Service, where consumers can scan the barcode on a product while in a shop on the high street and find out immediately whether one of 115 online retailers would sell it cheaper.

“In the future, my personal belief that consumers will expect to be able to use their phones to tap and pay for things, redeem coupons or gain access to an event. We don’t have a crystal ball – the trick is knowing exactly when all of those things will be possible,” concluded Le Brocq.