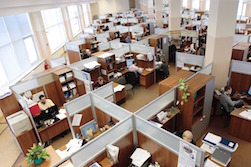 Globalstar Europe has launched a new satellite hotspot, allowing users to make calls and access the internet outside of a mobile network.

The Sat-Fi technology works via an app on any Wi-Fi enabled device, meaning users do not have to change their device or telephone number.

Up to eight users can connect smartphones, tablets or laptops to the Sat-Fi hotspot at the same time. Globalstar said the hotspot, which costs €995, offers satellite mobile data speeds of up to four times faster than the competition.

The company is targeting the hotspot at enterprises which work in remote areas. Among the examples it cited are the commercial fishing, oil and gas, disaster response and sailing industries.

Gavan Murphy Director of Marketing EMEA, at Globalstar, said: “Although we live in a connected world, there are still billions of people who work, play and live in remote locations lacking reliable and affordable voice and data communications.

“With Sat-Fi, they now have the ability to use their own device to stay connected. This innovative product opens up new opportunities for business and consumers to rely on Sat-Fi to maintain reliable connectivity and peace of mind even when off the grid.”

Earlier this week, Telenor launched a satellite to bring mobile connectivity to shipping lanes across the North, Norwegian, Red, Baltic and Mediterranean seas. The Norwegian operator is using the Ka-band to connect users.

In January, Virgin and Qualcomm said they were joining a project to launch almost 650 micro-satellites to connect remote areas.

T-Mobile Netherlands to use drones to run network hardware checks